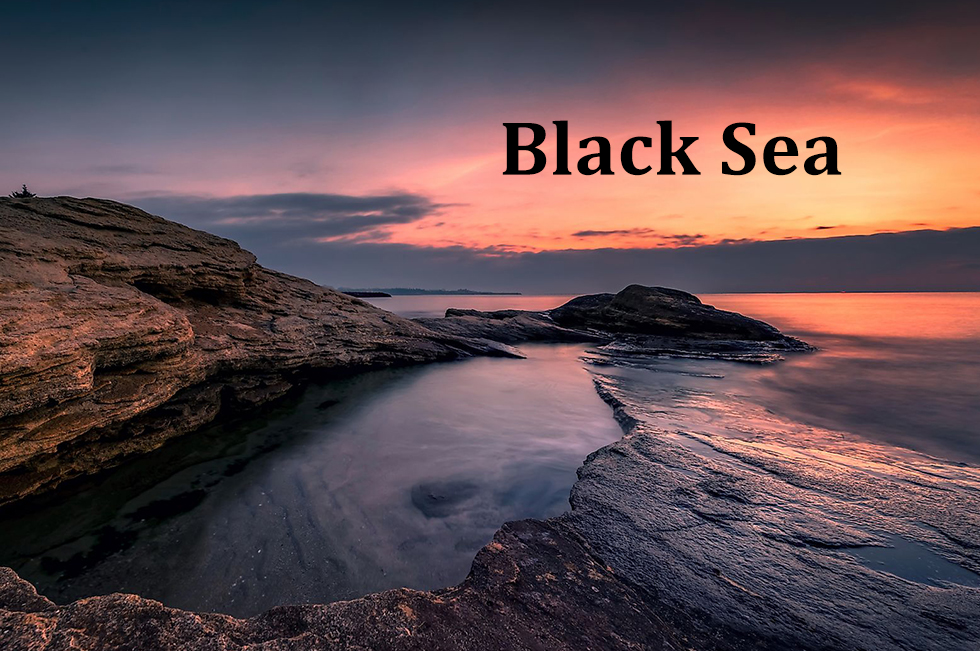 The Black Sea, also known as the Euxine Sea, is one of the major water bodies and a famous inland sea that connects with the Mediterranean Sea through the Bosporus Strait, and then through the Sea of Marmara and the Dardanelles Strait. This marginal sea of the Atlantic Ocean, located between Eastern Europe and Western Asia, for a long time, has been called an inhospitable sea by Greek. Later, after the successful development of the coast by Greek colonists, the sea was renamed “Hospitable Sea.”

The name Black Sea may have been derived due to metal objects from ships, dead plants, and animal matter that sank deeper than 150 meters for a long period of time and became covered with a black sludge due to the high concentration of hydrogen sulfide in the sea. From the perspective of sailors, the sea was black due to severe storms in the winter, during which the water is so dark it looks black.

Spread across an area of 436,400 km2, the Black is located in Eurasia, surrounded by Europe, Caucasus and Anatolia. The countries that share a border with the Black Sea include Romania, Turkey, Bulgaria, Ukraine, Russia, and Georgia.

The Black sea also links with the Aegean Sea and the Sea of Crete before meeting the Mediterranean.

The Black Sea and the region surrounding it are characterized as favored geographically. Connected to the Mediterranean through the straits, the Black Sea constitutes a convenient route to the west, while it serves as a crossroads between Europe, Asia, and Africa. The majority of the long-distance trades overpass the Black Sea, giving commercial prosperity to the ports around it.

Historically, the fate of the Black Sea region seemed to depend, to a great extent, on the outside powers. Prosperity grew whenever the region was dominated by one of them and a temporary period of peace was imposed from above. On the other hand, at times when two or more powers fought for their dominance and control of the region, there existed war, economic and demographic decline.

Ancient mariners regarded the Black sea as a difficult body of water to navigate since its shores were inhabited by savage tribes. In addition, the anoxic nature of the Black Seawater, due to which the process of decomposition is slow in the lower water layers. The Black Sea has a depth of over 150 meters, and its waters are filled with hydrogen sulfide for almost two kilometers. Therefore, in the deepest layers of its water, there are no living things except sulfur bacteria.

With rivers providing an abundant supply of freshwater, the upper layers of the Black Sea are less dense than its saltier lower layers. A permanent boundary between the two prevents any vertical mixing. The oxygen, derived from the atmosphere and photosynthesis, remains restricted to these surface waters.

Marine Lifelike, bottlenose dolphins, and about 180 species of fish, including tuna, anchovy, herring, mackerel, and the famous white sturgeon inhabit the waters, while Monk seals, sadly, have become extinct here.

Also, Since the Russian annexation of the Crimean Peninsula in March 2014, the Black Sea has become one of the areas of confrontation between Russia and the West. In response to Russian aggression towards Ukraine, NATO leaders decided in the Wales Summit on Sept. 4-5, 2014 to increase the Alliance’s deterrence capability in Eastern Europe and the Black Sea, to reassure allies and partners.

The most recent NATO Defense Ministers Meeting on Feb. 15-16, 2017 in Brussels also endorsed two additional maritime measures: An enhanced NATO naval presence in the Black Sea, and a maritime coordination function between NATO Standing Naval Forces, which provides a continuous naval presence for the Alliance in various seas around the world and allied forces in the Black Sea.

As the Black Sea has increasingly become an important component of Euro-Atlantic security, the Alliance has moved to bolster its military presence in the region through connecting the domains of air, land, and sea.

Many ships like Cargo ship Alvin, have encountered terrible accidents due to bad weather conditions and sunk off the black sea coast. Also as migrants from other countries use this route for illegally entering Europe, which has time and again been deemed unsafe. It has been stated that 80% of these attempts of migrating via this route fail.