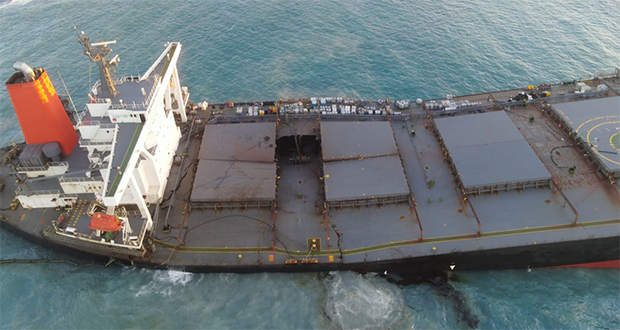 The 58-year-old captain of the ill-fated newcastlemax Wakashio could face negligence charges after it emerged the crew were celebrating a crew member’s birthday and had headed nearer towards the Mauritius coastline to get a wifi signal just prior to the bulk carrier’s grounding on a reef off the island’s south coast.

The bombshell revelations – first reported by local newspaper L’Express – come from investigators who have interviewed the crew of the Japanese-owned, Panamanian-flagged ship.

The Wakashio grounded on a reef near UNESCO protected sites on the evening of July 25. Local authorities had been trying in vain to contact the ship ahead of the accident to warn it was on the wrong course. It transpires the crew were celebrating a birthday hence missing the initial urgent calls.

The wrecked ship, on the verge of breaking up, has since spilled around 1,000 tonnes of bunker fuel into the pristine Mauritian waters, creating the republic’s greatest ecological disaster.

The Panama Maritime Authority had earlier suggested the ship ran into difficulty because of bad weather, although data providers have shown there was no inclement weather around southern Mauritius at the time of the accident.