BIMCO: Scrubbers Contribute To Increase In HSFO Sales In 2021 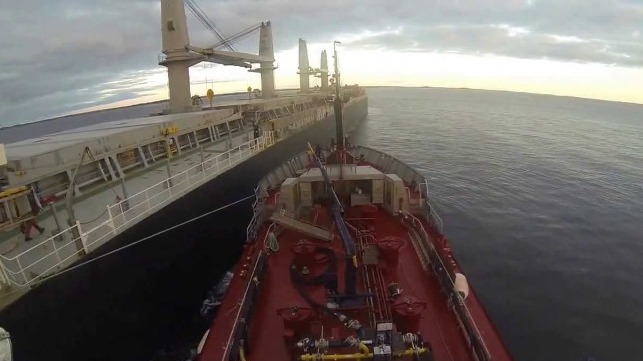 A year after the start of the IMO’s 2020 sulfur cap, the price spread among the different types of fuel has stabilized contributing both to a rebound in sales of high-sulfur fuel and supporting the business case for scrubber installations according to a new analysis from BIMCO. The industry trade group for shipowners, charterers, shipbrokers, and agents, predicts that sales of HSFO will remain stable going forward as the industry awaits new solutions and continues to use scrubbers.

The analysis highlights a nearly 50 percent increase in sales of HSFO in the first quarter of 2021 versus a year ago. While sales of high sulfur fuel are today less than the level in the first quarter of 2019, they grew by a reported one million tons in 2021, to surpass three million tons, and the increase in HSFO sales exceeded the fall in low-sulfur fuel oil (LSFO) and marine gas oil (MGO) sales.

“After the quick adjustment to the global sulfur cap, the decline in HSFO’s share of total bunker sales has stopped,” says Peter Sand, BIMCO’s Chief Shipping Analyst. “Although its share is much lower than any time prior to Q4 2019, the steady rise in scrubber-fitted ships has supported demand for HSFO and will remain until new solutions and future fuels are widely introduced on the industry’s path to decarbonization.”

BIMCO’s analysis shows a similar pattern in each of the major bunkering hubs. In Singapore, the largest bunkering port, total bunker sales were up nearly one percent, with MGO down by a quarter to less than 10 percent of the market, and LSFO down more than five percent, accounting for about two-thirds of the market.  HSFO’s market share also rose in Panama where it went from seven to 17 percent of sales while it accounted for a similar 177 percent in Fujairah.

“In addition to changing the share of fuel types being sold, the global sulfur cap has also resulted in larger bunkering hubs gaining an even larger market share, and recording growth in 2020 despite a drop in total bunker sales,” says Sand. “This development was due to owners and charterers seeking to minimize risks by choosing the biggest bunker hubs in the face of uncertainty surrounding the new fuel types.”

Scrubbers are supporting the sales of HSFO and continue to show a compelling business case for their use according to BIMCO. The number of scrubber-fitted ships doubled in the thirteen months after the global sulfur cap came into force, they report, with currently 4,006 scrubber-fitted ships, up from 2,010 ships in January 2020. A quarter of all major shipping types are fitted with scrubbers with crude oil tankers having the highest share, at 30.5 percent, while just under 14 percent of the total capacity of oil product tankers are fitted with scrubbers.

The future of scrubbers, however, in part depends on the price spread. After price fluctuations between the high and low sulfur options, the spread has largely stabilized at $100 per ton reports BIMCO.

“With the price spread in fuels now stabilizing at a more normal level, a scrubber investment still represents a solid economic decision for owners, as higher earning, thanks to lower voyage costs, are enough to cover the initial cost as well as the running costs of the scrubber within a reasonable period,” says Sand.

Sand’s analysis also shows that the financial case may improve the impact of the pandemic lessens. “Low demand for certain oil products as a result of mobility restrictions has helped lower the price of LSFO,’ says Sand. “However, as demand for products such as jet fuel starts to recover, the HSFO-LSFO spread may well increase, solidifying the economic case for scrubbers.”

The pace of scrubber installations has slowed since its peak in January 2020, with the majority coming as part of new builds and far fewer retrofits. Sand believes that the majority of shipowners who wanted to undertake retrofits have completed them, supporting the recent increase in HSFO sales.