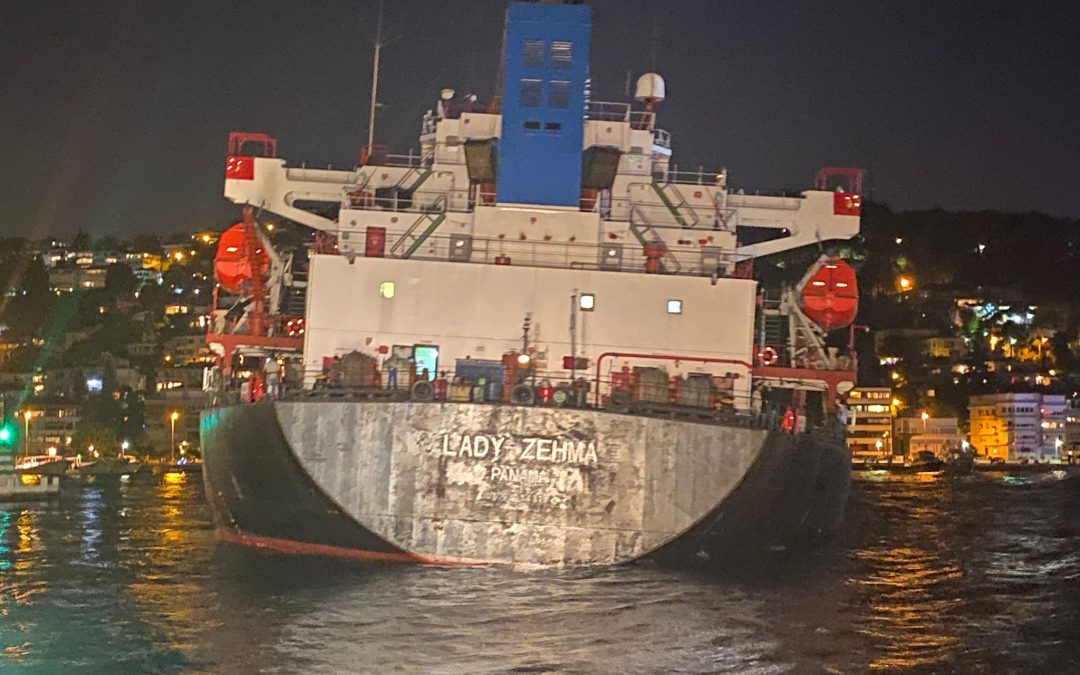 The cargo ship, which had a rudder failure while cruising from Ukraine to Istanbul, ran aground 40 meters from Bebek Bay in Istanbul Strait after drifting for meters in the Bosphorus. The panic experienced during the drift of the ship was reflected on the mobile phone camera of the citizens.

The cargo ship Lady Zehma, which set off from Ukraine, had a rudder failure while crossing the Bosphorus in Bebek, Istanbul. The ship, which was dragged for meters in the Bosphorus, ran aground 40 meters from Bebek Beach.People living around Bebek experienced great panicThe cargo ship drifting in the strait continued to drift despite anchoring. The ship drifted ashore after colliding with Bebek Lighthouse. While the citizens were experiencing fearful moments, the boats anchored on the beach began to flee.Panic moments caught on cameraThe images recorded with the mobile phone camera of the citizens were reflected in the moments when the ship drifted to Bebek Beach and the cruise boats anchored on the beach escaped. On the other hand, the panic moments experienced by the citizens in the boat were also recorded with the mobile phone camera.

Strait traffic suspendedAfter the accident that caused great panic, the General Directorate of Coastal Safety rescue tugboats and boats and the Coast Guard Command teams were dispatched to the scene. While the rescue efforts of the teams continue, the strait traffic is temporarily suspended. On the other hand, rescue teams belonging to the General Directorate of Coastal Safety got on board.Speaking about the incident, boat worker Bedirhan Aslan said, “From the very beginning; The ship started to sound the siren 150 – 200 meters from the land. He anchored from the right side of the ship. The anchor of the anchor broke with that weight. As the ship came closer to the land, the siren began to press harder. Most likely the ship’s rudder is locked. It was heading this way, and any rudder maneuver would have had no effect. I work here, I live here. I was right here in these moments of action. He started to cast the wharf anchor from the position he was already here. And these are very shallow. Thanks to the shallows, the bow of the ship began to turn towards land. When it started to turn towards the land, the boats here also became dangerous. We were going to try to get the boats out, but some boats have a captain and some don’t have a captain right now. Therefore, a great danger has been overcome,” he said.

Another boat worker, İsmail Hünük, said, “We were sitting with friends, and he started anchoring ahead. The normally straight ship turned this way when the rudder was locked. At that time, I informed the captain and friends. “Nene Hatun, the biggest tugboat of the Coastal Safety, is getting ready to tow the ship.”173 meters longIn the statement made by the General Directorate of Coastal Safety, it was stated that the ship named “Lady Zehma” ran aground due to a rudder failure while cruising from Ukraine to Istanbul and anchored in Bebek Bay. In the statement, “Our Rescue-5, Rescue-6, Rescue-9, Rescue-12, Nazım Tur tugs, KEGM-3, KEGM-5 boats were dispatched to the scene for the 173-meter-long cargo ship named Lady Zehma. Ship traffic in the Bosphorus has been suspended.” statements were included.Grain corridorAccording to VesselFinder, the Lady Zehma was built in 2005 and sails under the Panama flag. On August 30, the ship left the port of Chernomorsk with 3,000 tons of corn.On July 22, an agreement was signed in Istanbul between Russia, Ukraine and Turkey, with the participation of the UN, on the creation of a corridor for the evacuation of Ukrainian grain. According to the UN, from August 1 to 29, 122 ships with 1.2 million tons of products on board left the ports of Ukraine.