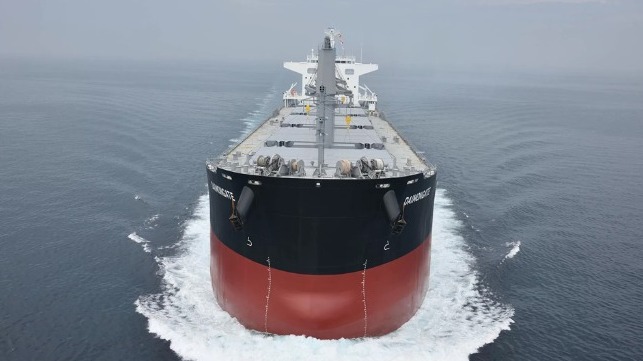 In the continuing efforts to deploy LNG-fueled vessels, Australian mining giant BHP has become the latest to reach agreements to support its adopting of the vessels which will reduce its share of CO2 emissions. Starting in 2022, the mining company plans to transport iron ore between Western Australia and China on five LNG-fueled Newcastlemax bulk carriers, which are projected to be the world’s first LNG iron ore bulk carriers of that size.

“LNG fueled vessels are forecast to help BHP reduce CO2-e emissions by 30 percent on a per voyage basis compared to a conventional fueled voyage between Western Australia and China, and contribute to our 2030 goal to support 40 per cent emissions intensity reduction of BHP-chartered shipping of our products,” said BHP Chief Commercial Officer, Vandita Pant.

BHP announced to support its conversion to LNG-fueled ships it will be awarding an LNG supply agreement to Shell. The agreement calls for the LNG bunkering to take place in Singapore. The FueLNG Bellina bunker vessel operated by FueLNG, a joint venture between Shell Eastern Petroleum and Keppel Offshore & Marine, will supply the vessels which will be on charter from Eastern Pacific Shipping (EPS) to BHP.

“The LNG bunkering contract will enable BHP to manage fuel supply risk, build LNG operational capability internally, and also help to strengthen the emerging LNG bunkering market in the region,” said Ms. Pant. “This contract is expected to form up to 10 percent of forecasted Asian LNG bunker demand in FY2023.”

The contract is the result of a tender process that included potential suppliers across several geographies. Technical capability, available infrastructure and cost competitiveness were among the stringent criteria.

Steve Hill, Executive Vice President, Shell Energy, said: “This LNG bunkering contract strengthens the bunkering market in the region and we look forward to working with BHP and other customers in the maritime sector on their journey to a net-zero emissions future.”

BHP announced its plans for the LNG-fueled bulk carriers launching a tender in July 2019. EPS was awarded the five-year time charter contract for five LNG-fueled Newcastlemax bulk carriers in September 2020. According to EPS, when these 209,000 DWT vessels are delivered in 2022, they will be the cleanest and most efficient in the entire dry bulk shipping fleet and will be IMO 2030 compliant, eight years ahead of schedule.