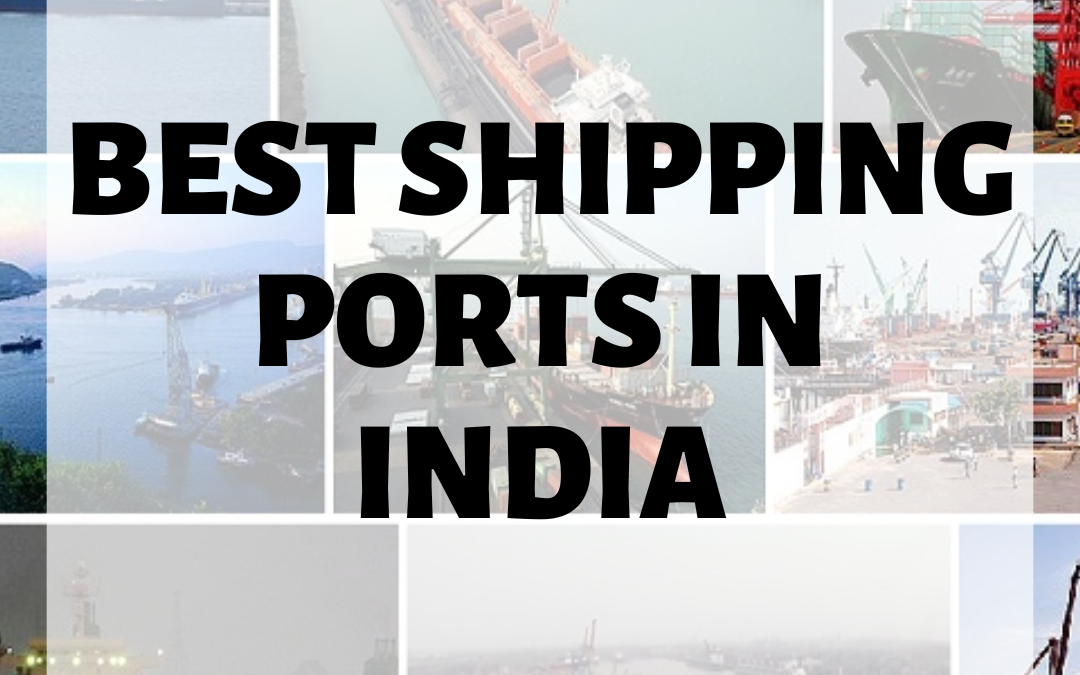 India has a coastline spanning 7516.6 kilometres, forming one of the biggest peninsulas in the world. It is serviced by 13 major ports, and 200 notified minor and intermediate ports. The total 200 non-major ports are in the following States:- Gujarat, Maharashtra, Tamil Nadu, Karnataka, Kerala, Andhra Pradesh, Odisha, Goa, West Bengal, Daman and Diu, Lakshadweep, Pondicherry, and Andaman & Nicobar.

Here is a list of the best Shipping Ports in India:

Jawaharlal Nehru Port (JNPT) – The largest container port in India is Jawaharlal Nehru Port, popularly known as Nhava Sheva Port. JNPT is located east of Mumbai, in Maharashtra, and handles the majority of India’s containerized traffic as well as long-haul calls to and from emerging markets’ most essential subcontinents harbors on the Western coast. Opened in 1989, it processes nearly 55% of container cargo passing through India. JNPT is ranked 28th amongst the world’s top container ports. At present, the port operates several container terminals. The JNPT Container Terminal is owned by JNPT and has 680 meters of quay spread across three berths.

Port of Mundra – As the largest private port in India, Mundra is a major hub for containers and bulk cargo. It is run by Adani Ports and SEZ Limited (APSEZ) and began operations in 2001. Mundra Airport is undergoing major developments to convert it into an international airport for air cargo. Currently, the port can handle 5 million TEUs and 338 million metric tons of cargo. The port operates 10 berths for dry bulk, 3 for liquid bulk, 6 container berths, 3 mechanized import berths, and 2 for SPM crude oil imports. There are dedicated facilities for handling products, such as wheat bagging units, coal processing stations, 97 holding tanks for liquid cargo, and a steel handling yard. There are dedicated facilities for general cargo, such as 16 mobile harbour cranes, 7 grab ship unloaders, pay-loaders, excavators, conveyor belt systems etc. The container terminals have 9 dock lines, over 2 kilometres of the quay, 18 rail-mounted cranes, and 48 gantry cranes.

Port of Chennai – The erstwhile Madras Port is the largest port on the Bay of Bengal coastline. Chennai port is the third oldest port in India. Operational since 1881, the port has been a driving force behind trade and commerce in the region and is known as the “Gateway of South India”. It is directly linked to over 50 ports, has ISPS and ISO 14001:2004 certifications, and is ranked 86th worldwide in TEU handling. As an artificial seaport on a coastal breakwater, the harbour covers nearly 4 sq. kms. The port is classified into the North, Central, and South zones which have 26 berths. The dock is divided into the Ambedkar Dock with 12 berths, the Satabt Jawahar Dock with 6 berths, the Bharati Dock with 3 oil and iron berths, and the container terminal with 3 berths, and the single mooring berth. The Bharati Dock can process Suezmax and Post-Panamax vessels. The container terminals are run by DP World and PSA International and services shipping lines including APL, Maersk, and NYK. There is also a cruise terminal within the port, the first in India, and it is currently under expansion work.

Port of Kolkatta – One of the largest riverine ports in India, Kolkata port is located 200 kilometers inland and is the oldest port in operation. It is a homogenous freshwater port that is located on the river Hooghly. The port services most of Northern and Eastern India and even neighboring countries such as Nepal, Bhutan, Bangladesh, and the Autonomous Region of Tibet. It has been used since the early 16th century and receives a sizeable portion of shipments to the North-Eastern states. The dry docks at KoPT are the largest in India and can handle smaller ship construction and repairs for most vessels. Due to the location, pilotage is required for ships over 200 GT. There are also lighthouses, light vessels, semaphores (for tide leveling), and other mechanisms to guide incoming vessels.

Bombay Port Trust – Known as the erstwhile Bombay Port Trust (BPT), Mumbai harbor is a major port in India. It is a natural deep-water seaport operated by the MbPT and spans 400 sq km. It is situated on the Arabian Sea and was opened by the British in the late 17th century. Its hinterland includes Central, Southern, and West India. This port maintains several docks with numerous berths and wharves. The Victoria and Prince Docks operate 20 berths and are semi-tidal. The Indira Dock has 21 berths and uses a lock to allow vessels to dock at all times.

Port of Vishakapatnam– Visakhapatnam port is the largest harbor in Andhra Pradesh. It is ranked 3rd in cargo volume and is close to the ports of Chennai and Kolkata. Under the Vishakapatnam Port Trust (VPT), the port currently operates 24 berths. It primarily services the hinterlands of Central and South India. The external dock has six berths and is the largest dock. The smaller internal dock has 18 berths capable of handling Panamax ships. The maximum anchorage draft is 17 meters across the harbors. Despite being prone to seasonal cyclones, the port is naturally protected by surrounding low-lying hills. A nearby harbor- the Gangavaram Port- shares cargo traffic with Vizag Port. The Indian Steel Federation, known as the RINL, has begun operations out of Vizag. The port is expanding to include coal and steel handling equipment.

Apart from the ones mentioned above, there are other vital ports. The network of these ports makes India a strong nation regarding maritime abilities and transportation of goods, thereby leading to more significant revenue generation and a strong economy.