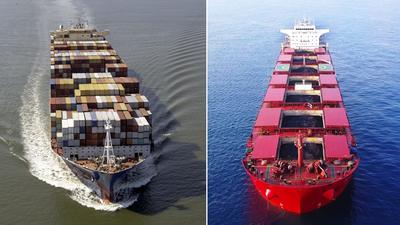 It’s worth a look back at this earlier shipping mega-spike. First, to compare and contrast with this year’s meteoric rise in container shipping profits. And second, to put current dry bulk rates — which are at decade highs and still rising — in perspective.

Dry bulk rates now and then

“While dry bulk freight rates and ship values are currently high compared to the past 10 years, they are very far from earnings seen during 2007-2008 and there is little to suggest that they are heading that way,” maintained Peter Sand, a chief shipping analyst at shipping association BIMCO, in a report last week. Sand said bulker owners “should acknowledge that this is unlikely to be the start of a super-cycle.”

American Shipper has an archive of financial analyst reports on public dry bulk companies dating all the way back to the earlier boom. These historical client notes offer a window on just how extreme the market was; analysts at the time commented nonchalantly on rates that would seem unbelievable today.

On Tuesday, Capesize spot rates were at the equivalent of $51,500 per day, according to Clarksons Platou Securities. For context, in June 2008, rates were reportedly 4.5 times that briefly hitting $233,000 a day, according to a client note from investment bank Dahlman Rose (the bank was sold to Cowen in 2013). At that time, a 5-year old Capesize sold for $150 million; they go for $44 million today (excerpts from Dahlman Rose Marine Transport Weekly: June 9, 2008, here).

Asked to compare today’s dry bulk market to the 2000s super-spike, Jefferies shipping analyst Randy Givens told American Shipper, “I’m not saying rates are going back to 2008 levels. What I’m saying is that this decade is going to be better than the last decade. For the last decade, the BDI averaged 1,250 and was never above 2,000 for more than very short periods.

On one hand, there’s a glaring difference between today’s dry bulk market and the 2000s market: The latter was fueled by an unprecedented surge of commodity imports by China. Demand growth today is not comparable.

On the other hand, rate dynamics are not only about demand, they’re about supply versus demand. Much of the current rate frenzy in container shipping is not due to higher demand — demand is exceptionally high in the U.S. but average on a global basis — rather, it’s due to congestion-constrained supply.

Dry bulk capacity is also highly constrained by congestion — 16% of capacity was stuck in queues in mid-August — and the orderbook is at just 7% of the on-the-water fleet, with new bulker orders being blocked out by those for new container ships and gas carriers.

Giveans agreed that vessel supply constraints could certainly push dry bulk rates higher in the months ahead. However, he sees limitations versus what’s happening now in containers and what happened in the past for dry bulk.

“Containers have a higher margin between the shipment cost and the goods being shipped,” he said. “If you have a high-margin item like a pair of shoes that cost $20 to produce that you can sell for $150, you can pay $100 to ship it and still make a profit.” Given how many shoes fit in a container, the high-margin shoe importer can still turn a profit by paying $20,000 per forty-foot equivalent unit on the trans-Pacific.

The same math applies to shipping iron ore from Brazil to China, or coal from Indonesia to China. The spread between the production costs and delivered price implies how high dry bulk rates can rise. “Containerized goods probably have a higher margin [than dry bulk],” said Giveans.

He also believes there was more pressing demand from China to import dry commodities in the 2000s super-cycle than today, providing more leeway for extremely high transport costs in the prior era. “With China joining the WTO and hosting the Olympics in August 2008 and the need to build out infrastructure, there was more urgency then than there is today. They were on the clock and they wanted to hit their growth targets.”

The idea that COVID-era dry bulk rates could rise back toward stratospheric 2007-2008 levels in 2021-2022 remains a fringe theory. That said, no one predicted the current container shipping bonanza. And archived analyst reports from 13-14 years ago reveal that no one predicted the earlier dry bulk boom either.

Dry bulk stocks experienced a massive run-up, peaking in October 2007 and then again in the May-June 2008, with many shares tripling or more during the period. “Multibaggers” of that era included Excel Maritime, Eagle Bulk (NASDAQ: EGLE), Diana Shipping (NYSE: DSX), Genco Shipping (NYSE: GNK) and Navios Holdings (NYSE: NM), among others.

The biggest stock winner was spot-exposed DryShips. Its share price skyrocketed to $131.34 on Oct. 29, 2007, more than seven times its 2005 IPO price of $18 per share. On that peak day, the shareholding of founder George Economou was valued at $1.7 billion (the equivalent of $2.2 billion today).

Analysts didn’t foresee dry bulk’s fall from grace amid the accelerating financial crisis, either. At the beginning of 2008, both Cantor Fitzgerald’s and Dahlman Rose’s 52-week price targets on DryShips topped $100. The stock ended 2008 trading at around $10. It never recovered and was whittled lower over the next decade by dilutive offerings before delisting in 2019.

Another example: Price targets at the beginning of 2008 for Eagle Bulk’s stock ranged from $18 (Citigroup) to $25 (Dahlman Rose), $36 (Cantor Fitzgerald) and $38 (Lazard). That stock was trading at $7 by December 2008. Eagle Bulk eventually filed for bankruptcy protection, as did Genco and Excel. Eagle and Genco emerged from Chapter 11, Excel disappeared (its fleet was sold to Star Bulk).

By the end of 2008, rates for Capesizes, Panamaxes, Supramaxes and Handysizes were lower than they are today. Dry bulk stocks and rates would flounder for the next 12 years.

“It certainly caught people by surprise,” said Giveans of dry bulk’s mid-2000s rise and fall. “The BDI almost doubled in a six-month period in 2007. In 2008, it dropped by over 90% between May and December. Rates went just bananas over a short period of time. When they move that quickly, it’s hard to be proactive.”