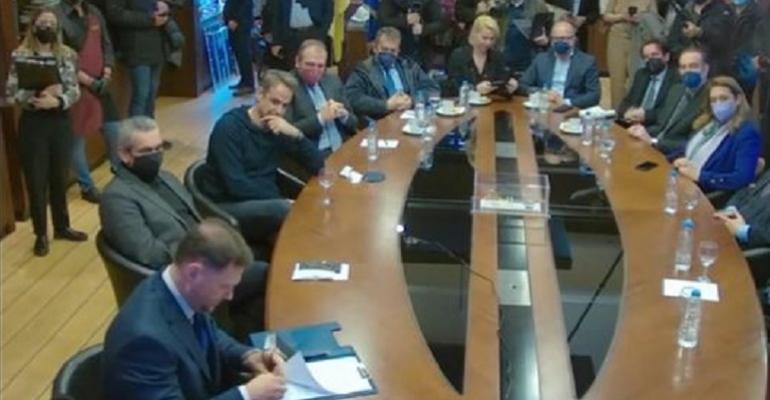 Greek Prime Minister Kyriakos Mitsotakis was guest of honour in Greece at a recent virtual ceremony co-located at ONEX’s yard on the island of Syros, and ASRY Bahrain, as Panos Xenokostas, President and CEO, ONEX Group, and Mazen Matar, ASRY Managing Director and board member, signed the MoU.

“The ONEX Group is one of the leading Greek business groups with a wide range of specialised companies such as ONEX Shipyards, whom we look forward to working with soon,” said Matar.

The Gulf ship repair industry has become increasingly competitive in recent years, with the entry of International Maritime industries (IMI) Saudi Arabia, which could emerge as the region’s largest shipbuilding and repair yard. The UAE’s Dubai Drydocks World, and Oman Drydocks Company, in Duqm, are also jockeying for position.

In October 2020, Rado Antolovic, CEO of Dubai’s Drydocks World, told S&P Global Platts that its yard had returned to almost full capacity as it emerged from the Covid slowdown, and that the five-year outlook was positive as shipowners adapted to changing environmental rules.

ASRY may have stolen a march on its competitors by partnering with a major Greek yard. According to the Union of Greek Shipowners (UGS), in 2021, Greek shipping represented 58% of the EU-controlled fleet and almost 20 percent of world deadweight capacity.

“Greece remains the world’s largest shipowning nation. With a fleet of 4,901 vessels, Greek shipowners control 19.42% of global deadweight tonnage (dwt). In 2020, the Greek-owned fleet grew by over 4% to approximately 364 million dwt,” the UGS said.

“We are very pleased to join forces with the Arabian Gulf’s leading maritime and industrial optimisation yard ASRY. Together, we can implement best practices and exchange valuable know-how to benefit our shared clientele. Our alliance will leverage our competitiveness to address the global market,” said Xenokostas.

Founded in 1977, ASRY claims to be the Gulf’s most experienced maritime repair and fabrication yard. Its range of facilities includes a 500,000 dwt dry-dock, two floating docks of 252 metres and 227 metres in length, 15 repair berths and a 250,000 square metre fabrication area. ASRY carries out repair and  conversion for ships, rigs and naval vessels, and fabrication and engineering, often on offshore assets.