Autonomous Boats For Passengers And Logistics On Amsterdam’s Canals 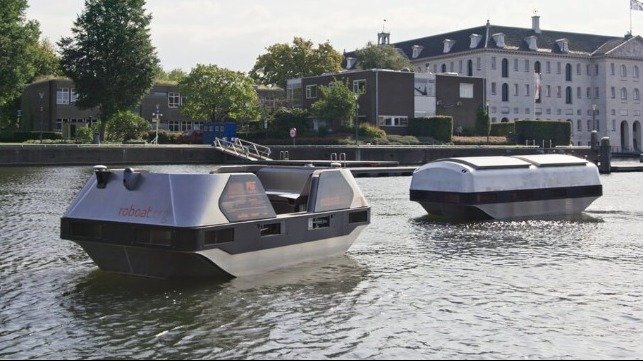 A research project led by the Massachusetts Institute of Technology and Amsterdam Institute for Advanced Metropolitan Solutions has successfully developed two full-scale prototypes of autonomous vessels to operate in the Amsterdam canals. Conceived as a means of moving some of the city’s traffic to waterborne transportation, Roboat as it is known is progressing to its next phase developing the cases for passenger transport, waste collection, and monitoring the waterways, and commercialization.

“The historic center of Amsterdam with its network of canals and modern-day challenges – such as congestion and logistics – is a perfect place to start the real-life pilots aimed at creating more sustainable and smart transport over water,” says Stephan van Dijk, Director of Innovation at AMS Institute.

With 165 canals winding alongside busy city streets, about a quarter of Amsterdam’s surface area is water. Five years ago, MIT and AMS Institute started the project to develop a fleet of autonomous vessels to re-imagine the Amsterdam canals.

“Whereas autonomous shipping focuses on more straightforward trajectories, Roboat is designed to navigate dynamic and busy urban waterways, such as the Amsterdam canals. It makes Roboat relevant for delta cities and harbor areas worldwide. It also creates new possibilities for flexible urban infrastructures. Combined with its ability to perform its tasks 24/7, Roboat can add great value for a city,” says van Dijk.

In the most recent phase of the project, the researchers and engineers focused on developing autonomy for the two full-scale prototypes, including the ability for way-point finding, autonomously docking and undocking, and collision avoidance.

Like other autonomous shipping projects, Roboat incorporates a range of sophisticated technology. It uses LIDAR and cameras to enable a 360-degree view that lets Roboat understand its surroundings. The team is also deploying algorithms that among its capabilities will categorize specific objects it detects in its pathway. When new objects are detected it initial flags them as unknown and then the team manually selects and tags the objects training the algorithm so that in the future it can outperform the human eye in object recognition.

“Every time the vessel navigates the area, it gains experiences and learns from previous situations and object encounters. As a result of the continuous feedback loops Roboat can now autonomously navigate in this area,” explained Ynse Hendrik Deinema, Roboat Project Coordinator.

The boats also feature a latching mechanism that allows them to connect to a docking station or another Roboat. The ability to interconnect permits Roboat to form temporary bridges that could create new urban infrastructure, as well as floating stages and bridges.

Tests take are place at the inner-harbor of Marineterrein Amsterdam Living Lab. Project partners also include the City of Amsterdam and Waternet. Sponsors working with the team include Murata that was responsible for the 12kW battery pack, Torqeedo which developed thruster pods, and VETUS that supplied the bow thrusters. The hull was constructed by Stormer Marine.