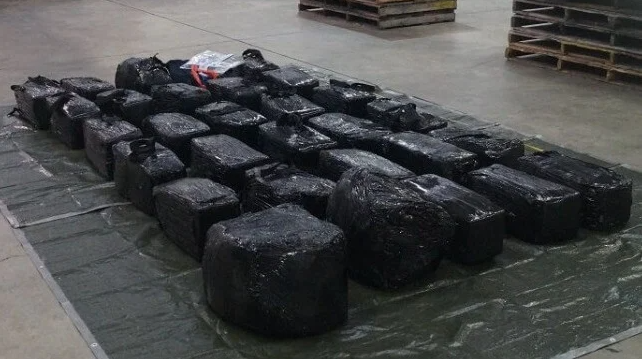 Australian authorities have seized 700 kilos of cocaine from a container aboard a Maersk boxship in Sydney, adding to the growing cocaine shortage in East Australia.

Australian Border Force (ABF) officers discovered the drugs aboard 22 July, 2022 during an inspection of containers aboard the container ship Maersk Inverness, which had docked a day earlier. The shipment was packaged in 28 denim bags inside a shipping container marked as “wood products” on the manifest. Each bag contained 25 kilos of cocaine, and each brick carried a brand name, including “5,” “365” and “Netflix.” The ABF estimates the value of the shipment at about $195 million (USD).

After an inspection, the Inverness was allowed to continue on her commercial voyage. AFP Detective Inspector Luke Wilson said the container ship had stopped at ports in Central and South America before making its way to Australia.

“The interception of this amount of drugs would be a significant blow to a well-resourced syndicate, and prevents millions of dollars of drug profit flowing back into the syndicate to fund their lavish lifestyles or next criminal venture,” said Wilson.

Australia has always had high street prices for cocaine, but the value soared during the pandemic. It has recently ranged about $220-280 per gram – vastly more than the $3-4 paid in Colombia, or even the $80-120 price range found in the United States. This is a lucrative opportunity for smuggling syndicates: Australia has more cocaine users per capita than any other nation in the world, with the largest concentration centered in Sydney, and annually they consume an estimated 5.5 tonnes of the drug.

The profit potential trickles down to the wholesale market as well. A one-kilo brick of cocaine delivered to Sydney is worth a tremendous amount of money – up to 75 times as much as it’s worth on the dock in Central America.

“So the risks that these facilitators or these organized crime syndicates in Australia — they are willing to take [them],” Andalusia Knoll Soloff, a reporter based in Mexico City, told News Corp.

The Australian Federal Police are still looking for the criminal syndicate behind the 700-kilo shipment seized aboard Maersk Inverness.