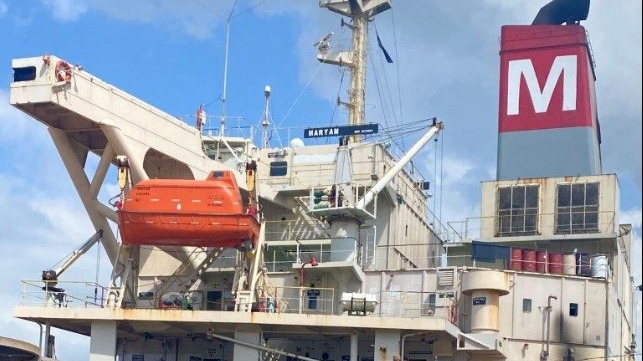 Australian maritime authorities have detained two vessels owned by a Qatari shipping company for labor and safety violations. The International Transport Workers’ Federation has been working with the Australian authorities to provide relief for the crew trapped aboard the vessel while the owners address the deficiencies.

According to the ITF, after speaking to the ship’s captain and crew, the inspectors found the ship’s owner, Aswan Trading and Contracting, had failed to pay suppliers leaving the ship without fuel for the engine, power, and lighting. The 23 crew members had been living aboard the ship at times without lighting, air conditioning, or power for refrigeration as well as no running water.

AMSA had found multiple problems with the bulk carrier’s main generators, forcing the crew to use the ship’s emergency generator, which itself had no fuel. A shoreside generator had to be found and lifted on deck to provide power to the vessel. Recently, repairs have been completed on the generators.

The Maryam was running low on fuel and food, which the ITF worked with the local authorities to supply to the crew. Further, AMSA and the ITF determined that the crew was due nearly $28,000 in back pay and promised bonuses. The ITF reported that it was able to get $5,000 cash given to the master to be distributed among the crew.

Before the Maryam will be allowed to leave Port Kembla, AMSA is also requiring that nine crew members who were working on expired contracts must be repatriated as required under international maritime labor laws.

The same vessel owner has a second vessel, a 97,045 dwt bulk carrier named Movers 3 that was also identified due to violations aboard. AMSA detained but later released this vessel only to renew the detention order. The vessel which is registered in Panama was ordered to stay in the outer harbor at Weipa according to the ITF due to problems with its engine.

Among the welfare issues identified aboard were broken freezers for the storage of food. One crew member, the cook, resigned and asked the local authorities to arrange for his repatriation while AMSA and the ITF were investigating the crew’s contract and the payment of wages and bonuses.

The ITF is also highlighting that it is the same ship owner that abandon 19 seafarers in Kuwait. The crew of the Ula resorted to a hunger strike after having been abandoned for 14 months and due more than $410,000 in unpaid wages. According to the ITF, the crew remains aboard the ship in Kuwait.

Based on the repeated violations, the ITF and the Maritime Union of Australia are calling on the Australian authorities to enforce international labor regulations and to also ban ships operated by Aswan from Australia.