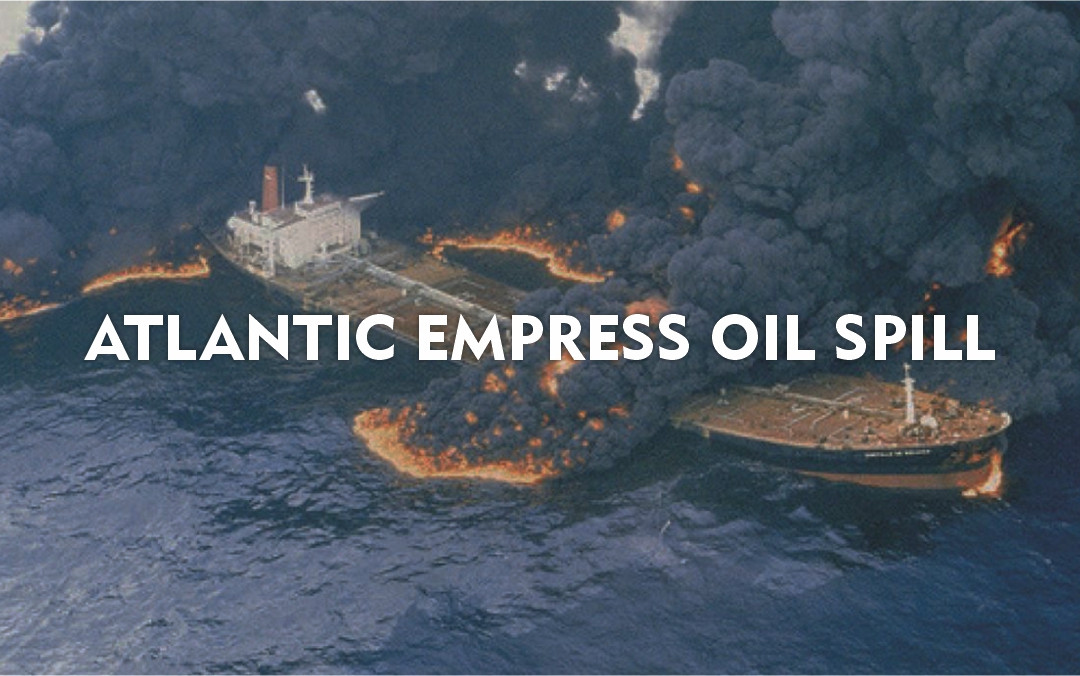 In our series of major oil spills in the history of maritime, we have seen three of the major and devastating oil spills. The next one on our list is the Atlantic Empress Oil Spill which is considered to be the largest ship-based oil spill in the world.

The Caribbean Sea regarded as the tropical sea located in the southeast of the Gulf of Mexico had witnessed what could have been one of the largest spills to that time. On 19th July 1979, the very large crude oil tanker named the Atlantic Empress (carrying 276,000 tonnes of crude oil) and the Aegean Captain (carrying 200,000 tonnes of Crude oil) collided with each other in the Caribbean Sea resulting in the death of 26 seafarers. The incident was a disaster in the fullest sense of the word as it had the potential pollution threat of 3.5 million barrels (bbl.) of crude oil in the sea. Many with severe burns were rescued and taken to a hospital in Tobago. Built in the year 1974, the Atlantic Empress VLCC was sailing to Beaumont, Texas from Saudi Arabia. Precisely, in the opposite direction around 20 nautical miles off the Tobago Island was Aegean Captain heading towards Singapore fully laden with Crude oil. The 347 meters long, Atlantic Empress was noticed by the second officer of the vessel Aegean Captain as both the vessels were just meters away from each other.

The tropical rainstorm with heavy downpours had thrown the Empress on the path directly in line with the Aegean Captain. The early sight of the vessel and the order to drift the vessel away was of no use as it was almost difficult to prevent the collision. The bow of the Aegean Captain collided with the side of the Atlantic Empress caused a fire in both tankers. Without delay, the Captain of each of these vessels ordered the crew to abandon the ship.

In the aftermath of the accident, the Atlantic Empress was unable to anchor due to the fire running along the entire starboard side of the main deck. The ship was floating aimlessly about 10 miles and an east wind was pushing it to the west at about one knot an hour.

A rescue team was sent to control the fire on the Atlantic Empress and take it further out to sea. Unfortunately, they were unable to control the blaze. On the Aegean Captain, the fire was brought under control by the Trinidad and Tobago Coast Guard. The incident damaged the starboard bow of the Aegean Captain leading to smoke and flames coming from a forward deck. The vessel was drifted north at a Dutch Caribbean Island, Curacao, by a tug boat where the cargo was transferred into another vessel and minimum spillage was recorded which was sprayed with dispersants.

On the other side, the burning Atlantic Empress was anchored towards the open sea by five emergency crew specialists from the Dutch Salvage Organization Smit International where they tried to control the fire and spread oil slick.  Major firefighting and pollution dispersant operation was carried out. However, on the night of 24 July, another explosion took place, due to which a larger amount of oil was released into the sea. To reduce the intensity of flames a tug boat continued to spray water onto the deck. The oil spill covered an area of about 50 miles.

July 29 witnessed the powerful explosion on the Atlantic Empress where the flames reached the height of 300 feet and the deck of the ship was blown open. As a result, most of the firefighting equipment was destroyed and another portion of the vessel including 2 center tanks and the port side of the vessel was damaged.  Despite the consistent efforts of the rescue team, on 3 August, the Empress sank taking nearly two weeks to sink after the collision. Followed by the surveillance of boats and aircraft, the oil that was still visible at the sea surface amounted to 287,000 metric tonnes spilled into the Caribbean Sea. Fortunately, no significant pollution reached the shore on the nearby islands.

In spite of the disastrous oil spill that carried out a huge loss to aquatic as well as human life, no significant studies or records were conducted to examine the shore pollution. The surrounding countries and international communities remained silent as awareness regarding marine pollution was comparatively less developed then than it is today.