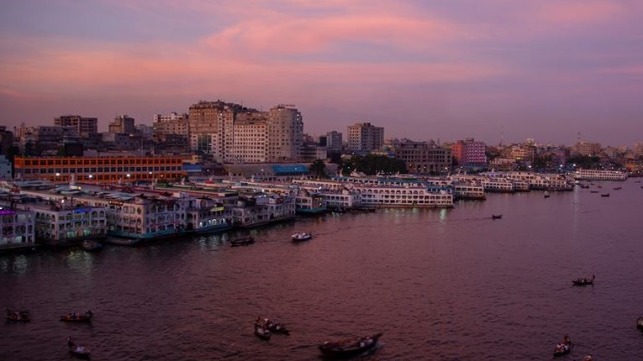 32 bodies have been recovered from the wreck of a ferry that sank Monday morning on the Buriganga River in Dhaka, Bangladesh.

The ferry, the Morning Bird, was struck from behind just yards from the busy pier at Sadarghat during the morning rush hour. According to M.D. Selim of the Bangladesh Inland Water Transport Authority, the Morning Bird was backing down and departing her slip at the time of the collision.

The head of BIWTA, Golam Sadeqk, told AFP that the vessel was properly licensed through September and that it was not overcrowded at the time of the casualty. Rescue divers have retrieved 32 bodies from the wreck so far, including the remains of three children, and the search continues. The low visibility in the muddy Buriganga River has complicated the search and recovery effort.

An investigation into the cause of the collision and sinking is under way; Sadeqk indicated that human error is the suspected cause. At least 50 and as many as 100 people were on board at the time of the capsizing.

According to the local online outlet BDnews24, the BIWTA salvage vessel Protya allided with the First Bangladesh-China Friendship Bridge over the Buriganga while attempting to respond to the casualty. The vessel reportedly struck a girder and could not proceed beyond the bridge due to the river’s high water level.

Deadly ferry accidents are relatively common in Bangladesh, where the maritime regulatory environment has historically been permissive, and overloading has been a common factor in many of the worst disasters. A government crackdown in recent years has reduced the frequency of capsizings with large-scale loss of life.