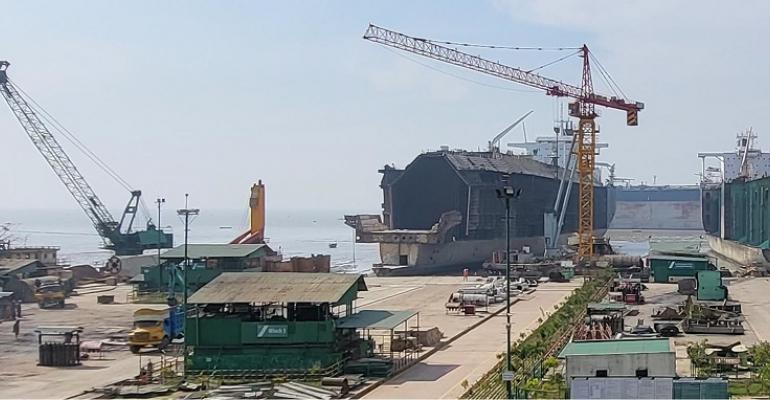 The Asian Shipowners’ Association (ASA) has noted an urgent need for more ship recycling capacity ‘in multiple countries’ to handle a likely near-doubling of ships sold for recycling expected next year.

A surge of elderly vessels likely to head for recycling yards in 2023 and beyond, as a result of new IMO regulations on carbon, is likely to place global recycling capacity under severe strain. This was one of conclusions of Asian shipowners whose ASAShip Recycling Committee (SRC) held an Interim Meeting late in March.

The Association issued a statement earlier today, expressing concern at the lack of existing facilities that are compliant with the IMO Hong Kong Convention*. Although the regulation was adopted in May 2009, it has still not entered into force.

The SRC drew attention to statistics from Clarkson Research which indicate that recycling volumes of 24.3m dwt in 2021 are expected to reach a similar level in 2022. However, the total is projected to reach 45.5m dwt in 2023 as a result of more stringent regulations and wider ‘green’ pressure, the SRC said.

Many ship dismantling yards in India have been granted Statements of Compliance (SoC) with IMO Convention requirements issued by major classification societies. However, only one facility in Bangladesh is has been issued with a SoC so far; none in Pakistan.

Under the terms of the IMO Hong Kong Convention ratification process, China is the only country that could trigger ratification in one go. However, although China used to be active in the ship demolition business, it has not been active in the sector for almost a decade. Nevertheless, the SRC said: “We hope that China will proceed with ratifying the Convention within this year as a leader for sustaining global environmental conservation.”

The backdrop is further complicated by the fact that slow progress on IMO Convention ratification has resulted in a second set of standards set out in the EU Ship Recycling Regulation. This imposes restrictions on EU shipowners seeking to recycle ships which must be processed at facilities approved by the European Union (EU). These are different from the requirements laid down in the IMO’s Hong Kong Convention.

So far, no yards on the Indian subcontinent, where most of the world’s end-of-life ships are currently processed, have been validated by the EU.

* Hong Kong International Convention for the Safe and Environmentally Sound Recycling of Ships, 2009 *