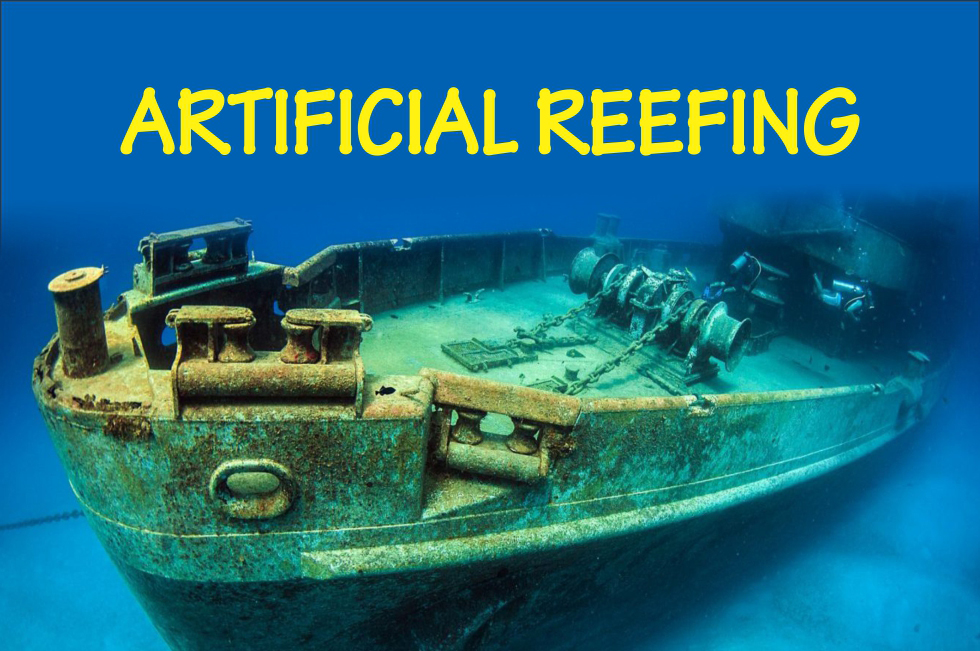 Moving on to the next topic, today we are going to talk about “Artificial Reefing”. An artificial reef is a man-made underwater structure that is frequently built to encourage marine life in areas with a largely featureless bottom, manage erosion, prevent ship passage, prevent trawling net use, or improve surfing. Many reefs are constructed by sinking oil rigs (via the Rigs-to-Reefs program), scuttling ships, or deploying rubble or construction waste. Other artificial reefs (such as the reef balls) are made of PVC or concrete. When preserved on the seafloor, shipwrecks may form artificial reefs. Artificial reefs, regardless of their construction style, provide hard surfaces for algae and invertebrates such as barnacles, corals, and oysters to attach to resulting in elaborate structures and food for fish populations.

What is the process of creating “artificial reefs”?

Artificial reefs are constructed in a variety of ways. Many people use existing materials to build reefs. A huge building, such as a ship, is cleaned of harmful elements and sunk at sea to form an artificial reef (AR). These can be anything from sculpted balls of cement to old subway cars. Over time, fish take shelter in the wrecks while sponges, corals, and other organisms begin to grow on them.

The Pros and Cons of Artificial Reefing

There are a number of pros associated with artificial reefs:

● They help to improve marine life in a particular area

● They give fishermen a new place to fish, which helps to relieve pressure on natural reefs

● Artificial reefs can be just as attractive as natural reefs, which benefits the tourist and diving industries

The Cons of Artificial Reefs

According to some individuals and organizations, Artificial Reef provides little advantage and, instead, causes more harm than good. The following are some of the disadvantages of artificial reefs:

● The materials used in artificial reefs, particularly when tires are used, can harm the ecology

● If the location of an artificial reef is not chosen correctly, it might harm marine life and other reefs nearby

Famous Artificial Reef across the world

Redbird Reef is an artificial reef located off the Delaware coast that is constructed mostly of decommissioned New York City subway cars. It covers 1.3 square miles of the ocean floor and sits about 80 feet below the water surface. Aside from the 714 subway cars, the reef is also populated with 86 retired tanks and armored personnel carriers, eight tugboats and barges, and 3,000 tons of ballasted truck tires.

Experts consider Redbird a highly successful example of an artificial reef. The seafloor in the Mid-Atlantic region is mostly featureless sand and mud, and the artificial reef provides a vital habitat for a number of invertebrate species, like blue mussels and oysters. Since its installation in 2001, the reef has spurred the growth of 400 times more food for fish compared to the bare ocean floor.

The USS Oriskany, a decommissioned aircraft carrier, found a new purpose in 2006 as the largest vessel ever sunk to create an artificial reef. The Oriskany, which is 888 feet long and weighs 30,800 tons, rests 24 miles off the coast near Pensacola, Florida in the Gulf of Mexico. Before it’s sinking, the vessel was reviewed by the Environmental Protection Agency to ensure that all toxic substances on board were removed. Its surfaces are now slowly disappearing under marine life such as coral, mussels, and algae. Among divers who visit the carrier, it is now commonly referred to as the “Great Carrier Reef,” a nod to Australia’s Great Barrier Reef.