Another Step Towards A Zero-Emission Future 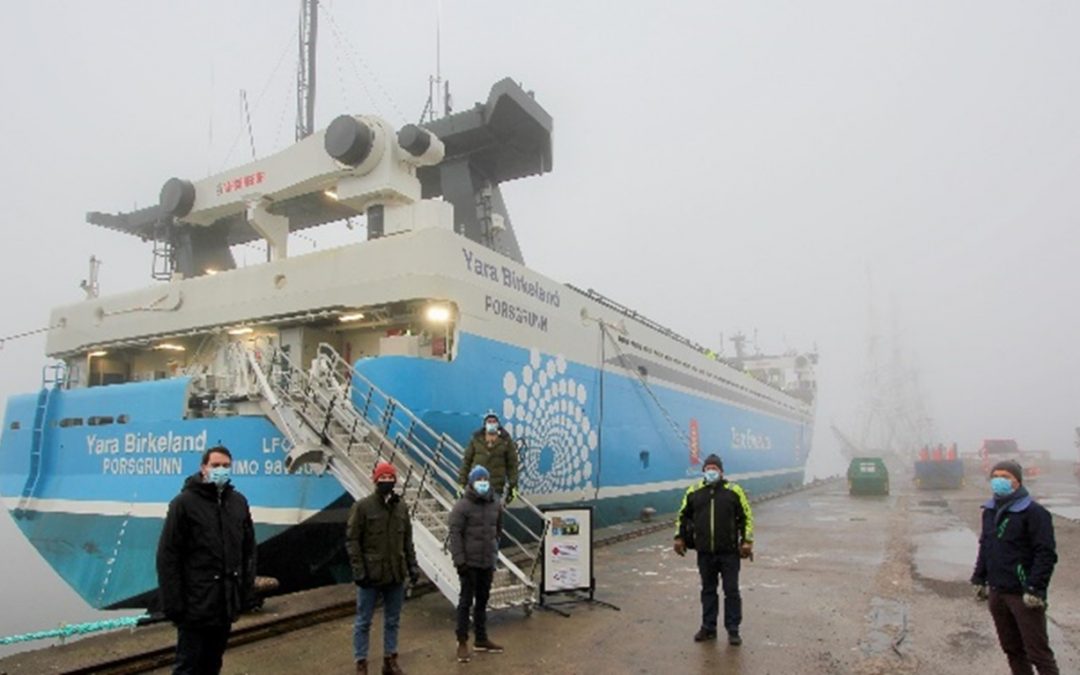 On 17 December, my colleagues and I were thrilled to be welcomed onboard the Yara Birkeland, the world’s first fully electric and zero emission container vessel. The vessel is registered in Porsgrunn and was delivered to Yara Norge AS in November. The vessel had just arrived after completing its maiden voyage from its home port to the autonomous ship testing area in Horten, powered solely by its own batteries.

It was a very foggy morning when we arrived at the former Norwegian Navy shipyard in Horten. We entered the port area and there, out of the mist, rose not only the bright blue and modern Yara Birkeland but also behind it the ghostly white Christian Radich, a sailing ship from 1937 designed to house and train young sailors. It was a grand meeting between old and new generations of Norwegian ships, both capable of sailing carbon free and separated only by some fifty meters and eighty years of technology and innovation!

Yara Birkeland is designed to ship bagged fertiliser in containers by sea thereby removing around 40,000 annual truck journeys between the Yara factory and the container terminals in Brevik. This change will increase traffic safety and significantly cut local pollution and greenhouse gas emissions even before factoring in the fully electric ship operation.

Jostein Braaten, the Yara Birkeland project manager, was happy to welcome us onboard for a grand tour and he was also happy to confirm that the first voyage and first test of stacking 120 fully loaded containers onboard had been completed successfully. In addition to insurance brokers from Bergvall Marine, the Gard visitors joining me were Senior Underwriter Steinar Jørgensen, and Senior Claims Adviser Karl Petter Muhlbradt. Currently the vessel is manned with a small crew but the bridge of the ship is modular and designed to be removed when the vessel is ready and certified to operate autonomously.

The Norwegian Coastal Administration has designated the Horten area as a national test area for autonomous vessels. Despite the pandemic and resulting slow down, Kongsberg Maritime and Yara aim to get all their partners, the university and research communities to run comprehensive tests of autonomous technology and systems before the ship goes into commercial operations.

Gard is proud to play our small part in the project by providing both the P&I Cover and Hull and Machinery Cover for the Yara Birkeland and we thank Yara Norge AS and project manager Jostein Braaten for the opportunity to visit this groundbreaking vessel (while fully masked and distanced). We look forward to a new year and the next steps bringing the vessel closer to autonomous operation – as our mission statement proclaims – “Together we enable sustainable maritime development”.