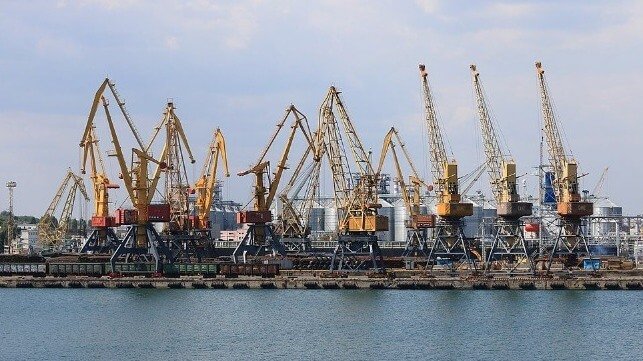 As Russia’s Black Sea Fleet launches a series of massive drills, shipping volume to and from Ukraine’s Black Sea ports is in decline, according to the latest numbers from VesselsValue.

The consultancy said that Ukraine’s dry bulk exports registered a particularly strong January, well above the historical average, but trade has dropped off sharply this month. Shipments of dry commodities in February are on course for a 44 percent month-on-month decline – about 15 percent below the five-year average for the month, according to Vesselsvalue.

Similarly, Ukraine’s oil exports have fallen dramatically, down about 45 percent month-on-month for February. At least part of this drop in has to do with reduced demand for the Caspian crude grade from Asian refiners. LPG and ammonia exports are also down by about 27 percent month-on-month, putting them at the low end of their historical range.

Though the Ukrainian government has urged calm, commercial shipping interests in the Black Sea may have cause for concern. Supported by elements of the Baltic and Northern Fleets, Russia’s Black Sea Fleet has launched a massive live-fire exercise off the coast of Crimea, prompting concerns over the possibility of an amphibious assault on the Ukrainian coast. The fleet exercise involves an unusually large concentration of tank landing ships, including six vessels that relocated thousands of nautical miles from the Baltic Sea in order to join in.

On Sunday, given the heightened tensions and the military activity in the Black Sea and the Sea of Azov, the U.S. Maritime Administration advised U.S.-flagged shipping to “exercise caution, conduct a risk assessment, review security measures, and incorporate appropriate protective measures into vessel security plans” when transiting the region. The U.S. Navy and its NATO allies currently have no surface warships in the Black Sea to defend Western shipping.

On shore, an estimated 130,000 Russian troops with armor and support elements have deployed along the northern and eastern borders of Ukraine. The U.S. and the UK have evacuated their embassies in Kyiv, and both have advised their citizens to leave the country immediately. Commercial airlines are warning of impending flight suspensions to Ukraine due to their insurers’ concerns about war risk, and Dutch carrier KLM has halted service to Ukraine indefinitely.