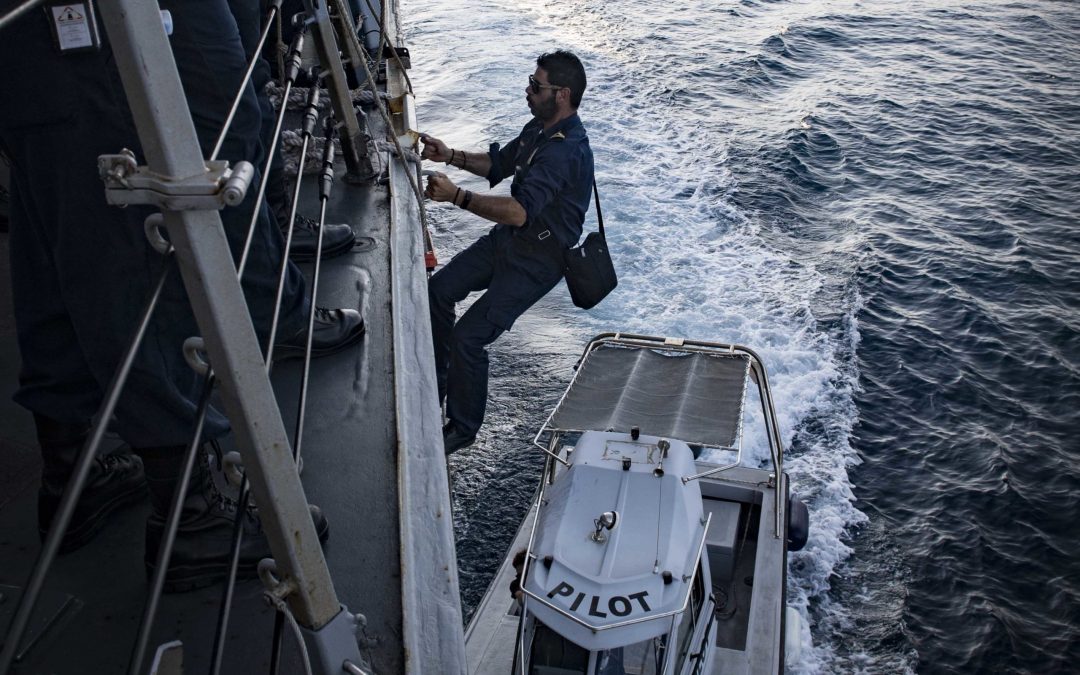 The senior pilot of a major American port told authorities today that he refuses to board any Russian flagged ships that enter the harbor. This comes on the same day the UK transportation minister called on all UK ports to deny access to any Russian “flagged, registered, owned, controlled, chartered, or operated vessels”.

In an email provided exclusively to gCaptain, the senior pilot asked west coast port authority officials to notify him if any Russian Flaged ships request entry into the port. The email, addressed to the manager of marine operations of the local port authority, states that the pilot refuses to board Russian ships. The port official responded quickly stating that he will take the message to the port’s executive team.

“The attack on Ukraine and escalating threats of nuclear war against the United States as part of NATO has altered the Russian Master/American Pilot relationship,” said the senior pilot in an exclusive interview with gCaptain. “Much of what we do as pilots require trust and teamwork. I have heard Russians support of Putin and don’t believe it’s in America’s best interest to assist them in generating profits.“

If this pilot’s request is approved, it could put pressure on increasingly congested American Ports, as well as Russian shipping interests.

gCaptain contacted a number of pilot associations around the United States. The majority said the issue had not come up yet, but would be reviewed at upcoming port meetings. Don Marcus, president of the Master Mates and Pilots union, said the issue has not yet been discussed.

“In Florida our pilots can not make that call directly as it would be a violation of state law,” said Laura DiBella Executive Director at Florida Harbor Pilots Association. “We will, however, discuss the issue with our pilots and federal officials.”

In the United States most pilots are licensed by Individual States and most pilots say it’s not clear if they can refuse to board ships owned or operated by specific countries.

“The decision not to board a Russian ship would have to be approved by the State or Federal Government,” said an executive on the board of another large west coast port. “We would refuse to pilot a sanctioned ship but we don’t have the resources to track down vessel ownership so that order would have to come from a government official.”

According to the AIS ship tracking service Fleetmon, there are currently no Russian flagged ships near an American port. It is not clear how many Russian owned, controlled, chartered, or operated vessels are currently in American waters.

“We don’t see many Russian ships anyway but some Russian crews and a large number of Ukrainian seafarers,” said one senior California Pilot. “The few Russians and Ukrainians I have talked with are all furious at Putin.”

gCaptain has reached out the the US Coast Guard for clarifictation and will update this article when we recieve a response. The pilots interviewed for this story asked to remain off the record.