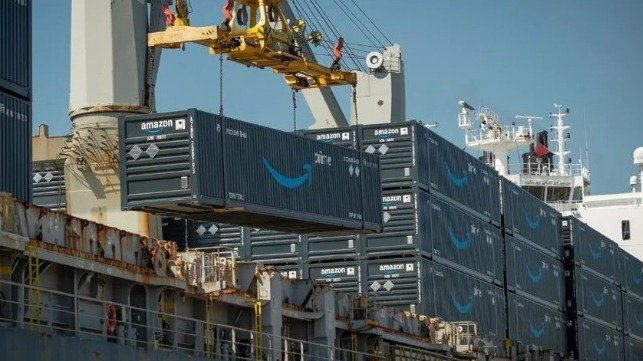 In the latest initiative aimed at decarbonizing ocean shipping, nine major retailers and consumer companies, including Amazon, Ikea, Michelin, and Unilever, announced that they are signing a pledge to switch all of their ocean freight to vessels powered by zero-carbon fuels by 2040. The Cargo Owners for Zero Emission Vessels (coZEV), organized by the non-profit Aspen Institute, said the initiative is designed to send an important demand signal to the maritime value chain and bunker fuel producers that freight customers want zero-carbon shipping. Today’s announcement, they said, is intended to heighten a sense of urgency and increase confidence in the investment opportunity presented by zero-carbon shipping.

“Maritime shipping has long been a major producer of climate and air pollution, and attempts to transition away from fossil fuels have faced significant hurdles, including a perceived lack of freight customer demand that has stifled investment and scalability of potential solutions,” said Ingrid Irigoyen, Director of the Aspen Institute Shipping Decarbonization Initiative, which is facilitating the coZEV effort. “We expect this movement among climate leading companies to grow rapidly. This will allow us to drive economies of scale, innovation, and a surge of confidence among investors and value-chain actors that there is a business opportunity in doing the right thing.”

In signing the pledge, the nine companies, which also include Patagonia, Inditex which owns Zara, Brooks Running, Frog Bikes, and Tchibo, recognized that the maritime industry currently produces as much as one billion tons of pollution impacting the climate each year. The Aspen Institute equates that to as much as a G7 country or all of America’s coal-fired power plants.

“We need to speed up the transformation towards zero emission ocean shipping,” says Elisabeth Munck af Rosenschöld Sustainability Manager Supply Chain Operations at IKEA. “By collaborating with like-minded partners, companies, and organizations across the value chain we can create strong movements.”

The new collation, coZEV, plans to work with a growing network of cargo owner companies, bringing together the companies to share ideas and support establishing the first zero-carbon maritime transportation corridors. They believe the initiative will give policymakers confidence to enact measures that will lower the cost of the zero-carbon transition while also harnessing the creativity, market power, and investment capacity of the participating companies.

The pledge also defines key elements of the efforts required as well as how they define carbon-free shipping. For example, they will not consider fossil gasses, including LNG, a zero-carbon fuel. Also, they will take a life cycle view of production and distribution for example saying that fossil-derived hydrogen will not meet the criteria. Zero-carbon applies to the full lifecycle, a step that environmental activists are immediately hailing.

The Ship It Zero coalition, led by environmental activist groups Pacific Environment and Stand.earth, however, was also quick to criticize the initiative. They said it is “too weak to address the urgent climate and public health crises tied to the ocean shipping sector.” The groups, which recently staged protests at the Amazon and Ikea headquarters, are demanding zero-emissions ships by 2030, a decade earlier than the commitment announced by the retailers.

The environmental groups criticized the new initiative saying that it did not contain specific actions that the signatories will take. They also said the effort only addresses climate pollution and did not go far enough failing to address broader air pollution from shipping.

“Today’s pledge is an important guidepost for the future of maritime shipping, but 2040 is simply too distant a horizon for the retail sector to address the enormous health and climate impacts from its cargo ships. If major retail brands truly want to do their fair share on climate change, they need to be on a course correction now, not 19 years from now. Cleaner shipping solutions already exist, and major retail brands like Amazon and IKEA must champion them,” said Kendra Ulrich, Shipping Campaigns Director, Stand.earth, speaking on behalf of the Ship It Zero coalition.

Madeline Rose, Climate Campaign Director, Pacific Environment also questioned why more large retailers were not part of the new initiative. Earlier this year, the environmental groups published a report saying that the shipments from 15 retailers and consumer goods manufactures were leading contributors to global emissions and demanding that they immediately transition to carbon-free shipping.

The Aspen Institute noted, however, that “while sending demand signals for zero-carbon shipping is essential to kick-start this transition, companies working with coZEV also recognize that market forces alone will not bring these solutions to scale.” coZEV said it is calling on policymakers around the world to take swift and ambitious action to advance maritime shipping decarbonization.