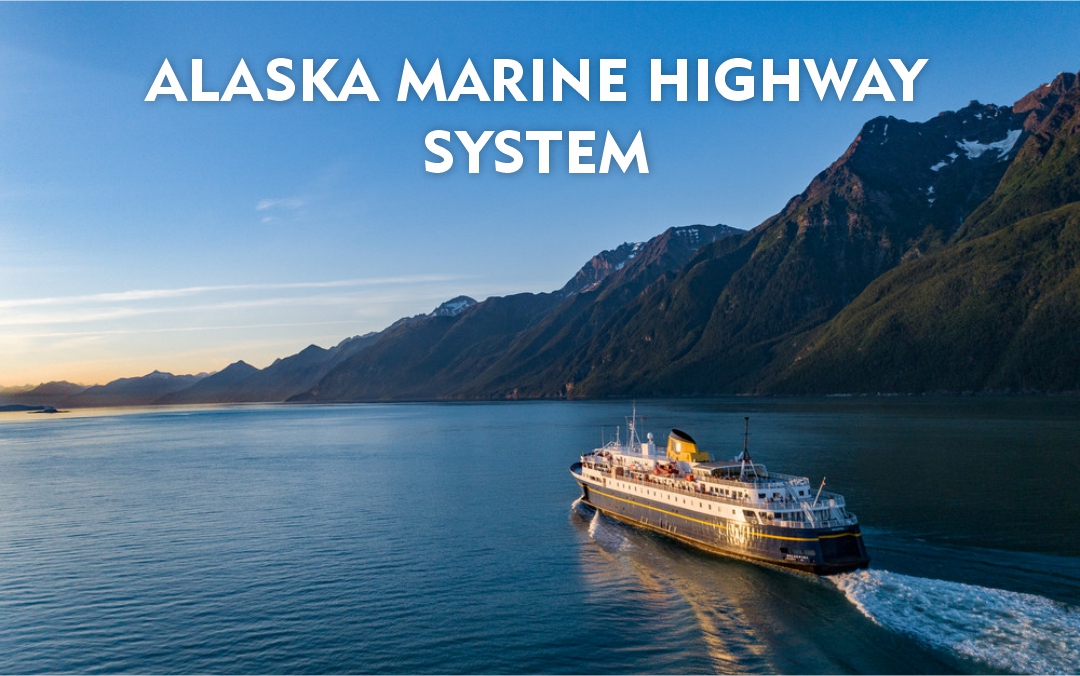 Alaska the constituent state of the United States of America, is astonishing, with marvelous views, and an abundance of wildlife that will blow one away. In the new article of the series of top ferry rides in the world, we are going to get you acquainted with the largest ferry system out of all the ferry operations in the USA. Rather than exploring one ferry service for this article, we captured a glimpse of all ferry rides which come under the system of the Alaska Marine Highway. It is a ferry service operated by the U.S. State of Alaska. The service connects several communities and local towns including Prince Rupert and British Columbia. The Alaska marine highway system not only gives a chance to enjoy inside passage, but you can also get on and off the boat for independent exploration.

The journey of the Alaska Marine Highway System started long before Alaska has even been a state. It was started back in 1948, when three Haines residents Steve Homer, Ray, and Gustav Gelotte dreamt of dependable marine transportation between Alaska’s coastal communities. To turn the dream into reality they set up a company named Chilkoot Motorship Lines and purchased an ex- Us Navy landing Craft. However, they had faced many difficulties in operation due to the severity of winter weather resulting in copious amounts of snow on the road to Haines. After several tries, they had to accept the offer of the Territorial Government and sell Chilkoot Motorship lines to the region of Alaska in June 1951.  Soon, in the year 1957 MV Chilkoot got replaced by MV Chilkat, commencing the daily service between Juneau, Haines, and Skagway.

The Alaska Transportation Act was approved in the first Alaska legislature meeting held in 1959, which approved the bond issues worth $18 million to expand the ferry fleet. This has given a chance to Alaskan state to operate four new vessels and build docks throughout Southeast Alaska and the Kenai Peninsula. Ketchikan, a popular cruise route along the State’s southeastern coast saw the emergence of the MV Malaspina vessel on January 23, 1963. Following the year, the fleet successfully transported 16,000 vehicles and 83,000 passengers. The Alaska state turned its focus to southwest Alaska after the successful attempt on southeast Alaska. A vessel built with an elevator capable of loading and unloading vehicles, the MV Tsutumena was introduced, by 1964. This vessel is serviced in the region Kodiak, Cordova, Homer, Seldovia, Valdez, and Seward with keenly priced access to not only the coastal neighbors but to other parts of North America. This vessel under the AMHS system had a total of 5 ferries and 16 ports of call and provided service to more than 100,000 passengers and nearly 22,000 vehicles. In 1968, in order to shuttle vehicles between portage and Whittier, a ferry rail link was established by adding the Port lions, Tatitlek, and Whittier to the system allowing access to the highway system closer to Anchorage, the largest city of Alaska. This route builds a connection to the Richardson Highway via Valdez for the residents of Anchorage.

Another new going vessel, MV Wickersham was purchased to run between Seattle, Washington, and southeast Alaska in the year 1968. This vessel was built by A/S Langesund Mekaniske Verksted in Norway which was named Stena Britannica. Being accused of a foreign-built vessel, the vessel was put up for sale in 1973 and later scrapped in 2001. Later, between the years 1969 to 1978 the vessels MV Tustumena, MV Malaspina, and MV Matanuska had undergone changes in their sizes. MV Tustemena was expanded by 56 feet resulting in an overall length of 296 feet. MV Malaspina and MV Matanuska were lengthened by 56 feet making an overall length of 408 feet, which increased both passenger and vehicle capacity on these vessels. Between the years 1974-77, AHMS expanded the fleet to include MV LeConte, MV Columbia, and MV Aurora. The sizes of these vessels led to the service to small ports such as Angoon, Pelican & Tenakee Springs.

The increase in the fleet demanded new ports of call. Hence, communities of Hoonah, Kake, Metlakatla, Pelican, Angoon, and Tenakee Springs were added to the system from 1970 to 1979. In the following years from 1990-2012 more vessels were introduced which were acclaimed nationally. The Alaska marine highway system celebrated its 50 year anniversary in 2013, by serving 35 communities in the Alaskan region. The latest ones under Alaska class ferries are Mv Tazlina and MV Hubbard.

After being purchased by the Alaska state government as an initiative to promote transportation and business in the Alaskan region, it soon became the catalyst in Alaskan tourism. With its aim of providing functionality rather than luxury, it has proved to be the most comfortable way of reaching various points within the Southern Alaskan Region.  With its glorious history and the nature of advancement, the Alaska Marine Highway System is continuously striving for maintaining the infrastructure of the system.