After IMO 2020, decarbonization in spotlight for shipping sector

Shipping companies in Asia and around the globe are steaming ahead with efforts to minimize their carbon footprint as the urgency to decarbonize intensifies after a fairly smooth transition to the International Maritime Organization’s low-sulfur mandate for marine fuels.

The IMO in April 2018 laid out its strategy to reduce the shipping industry’s total greenhouse gas emissions in 2050 by at least 50% from 2008 levels, and to reduce CO2 emissions per transport work by at least 40% by 2030.

The NGOs in a joint statement said “good technical progress” made at the virtual event “revealed that a properly enforced goal-based operational efficiency measure would unlock net savings for the shipping industry, as well as reducing CO2 emissions, and … looks increasingly inevitable.”

Shell, Deloitte Netherlands and Deloitte UK collaborated in a report released July 7 showing 95% of shipping executives interviewed worldwide viewed decarbonization as important, or a top-three priority, and nearly 80% noted its importance had increased significantly over the past 18 months.

“While shipping leaders are rightly focused on the current challenges of the COVID-19 pandemic, our research shows that they still have their sights on the horizon and identify decarbonizing shipping as a top priority,” Grahaeme Henderson, vice president Shell Shipping & Maritime, said in a statement then.

Shipowners are already making plans to intensify their GHG initiatives.

On July 7, Japan’s Kawasaki Kisen Kaisha, or K Line, revised its Environmental Vision 2050-Blue Seas for the Future, rearranging its targets into decarbonization with an “aim for zero environmental impact,” and setting new milestone goals.

K Line said it now targets improving CO2 emission efficiency for 2030 by 50% compared with 2008 levels, surpassing the IMO target of a 40% reduction.

Last year, NYK dry bulk carrier Frontier Sky conducted a trial use of biofuel, considered carbon-neutral, in Europe after the fuel was bunkered at the Port of Rotterdam in the Netherlands.

Taiwan’s Yang Ming Marine has already met its IMO 2030 target roughly over a decade early. In 2019, its fleet’s average carbon intensity – CO2 emissions per transport work—was down 51% compared with 2008 levels, falling from 99.4 g/TEU-km to 48.1 g/TEU-km, the company recently said.

Ports and port authorities will play a strategic role in decarbonization, and some have already listed the environmental push as a priority in their maritime agenda.

Singapore, the world’s largest bunkering port, has launched a Maritime GreenFuture Fund to create ecosystems for trials and test-bedding of low-carbon technologies.

Supported by the Maritime and Port Authority of Singapore, the Singapore Maritime Foundation has also established an International Advisory Panel on Maritime Decarbonization to foster a strategy to achieve GHG emission cuts. 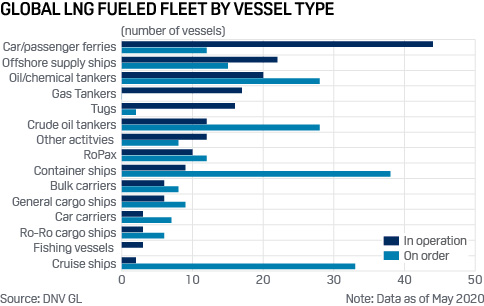 LNG as a marine fuel not only cuts sulfur emissions, but compared with existing heavy marine fuel oils emits 90% less nitrogen oxide. Through best practices and appropriate technologies it minimizes methane leakage, and realistically reduces GHG by 10%-20% with a potential for up to 25%, according to industry sources.

A Kogas official told Platts the company plans to sell 1.36 million mt of LNG to ships by 2030, with Won 1 trillion ($832 million) in revenue, through the bunkering joint venture, and reduce 8,315 mt of sulfur oxides and 2,557 mt of fine dust emissions by then. 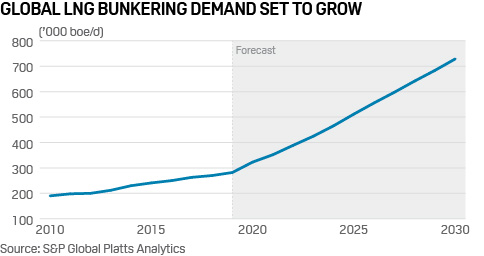 In the short term, the maritime industry should invest in initiatives that bring incremental energy-efficiency gains, industry sources said, adding this could include ordering more eco-friendly smart vessels, vessel modification and optimization projects for the existing fleet.

In the end, concerted coordinated industry efforts as well as continued research and development for energy efficiency improvements will accelerate the pace of GHG emission cuts as will increased pressure from customers to address climate change, sources said.