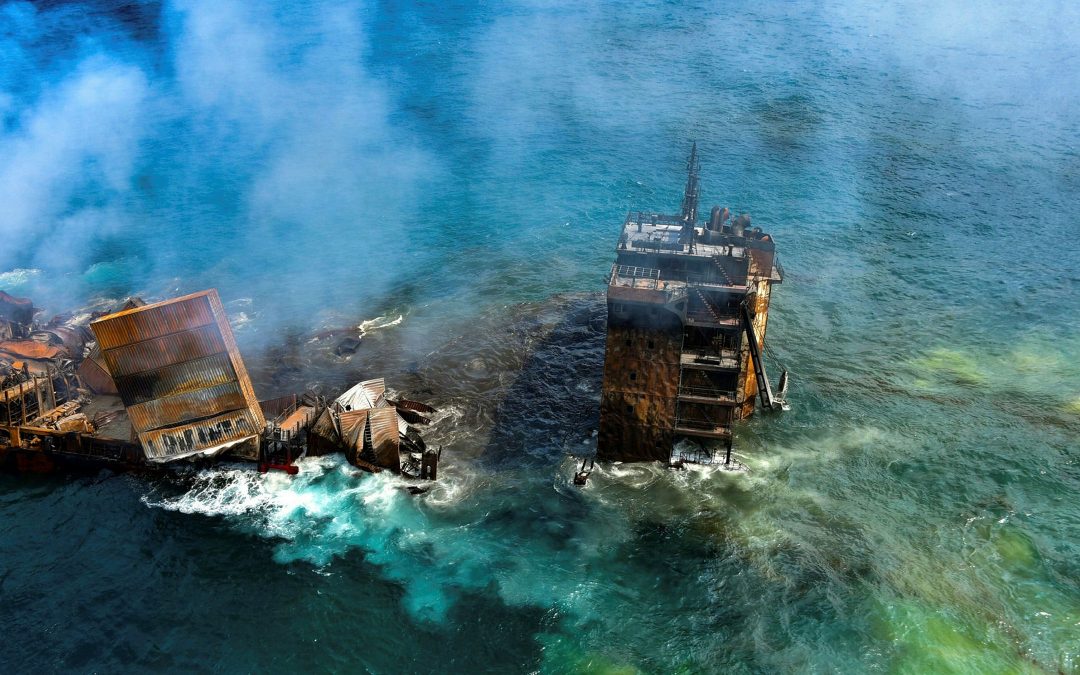 The aft section of the heavily fire damaged X-Press Pearl has sunk to the seabed at 21 metres while the forward section is also sinking.

X-Press Feeders, the Singapore-owner, said early on Thursday morning that it could confirm that the aft portion of the X-Press Pearl was sitting at on the seabed at a depth of 21 metres while the fore section was “settling slowly”.

The X-Press Pearl started to sink on Wednesday after salvors had started to tow the heavily fire damaged hull further away from the coast. Flooding of the engine room had raised concerns about the wrecked ship’s stability prior to the towage operation.

The immediate fear is of an oil spill from the vessel’s bunker tanks and a major environmental disaster along Sri Lanka’s coastline and fishing grounds.

The vessel’s owners said salvors monitoring the situation and for signs of pollution.

“Oil Spill Response Limited has been appointed to respond to any possible spill and is liaising with ITOPF, who will provide technical expertise. Both OSRL and ITOPF have people on the ground in Colombo coordinating with the Sri Lankan Navy on an established plan to deal with any possible spill of oil and other pollutants,” X-Press Feeders said.

Sri Lankan State Minister of Fisheries, Kanchana Wijesekera posted on Twitter that Sri Lanka’s Marine Environment Protection Authority would place booms around the ship and skimmers and dispersant spray would be used to tackle any oil spill from the hull. He said there were also contingency plans for beach clean-ups.

Cargo from the stricken vessel, which was carrying 1,486 containers, has washed up on Sri Lankan shores in the last week prompting a massive clean-up operation. Salvors estimate that most of the remaining cargo on the vessel has been incinerated.