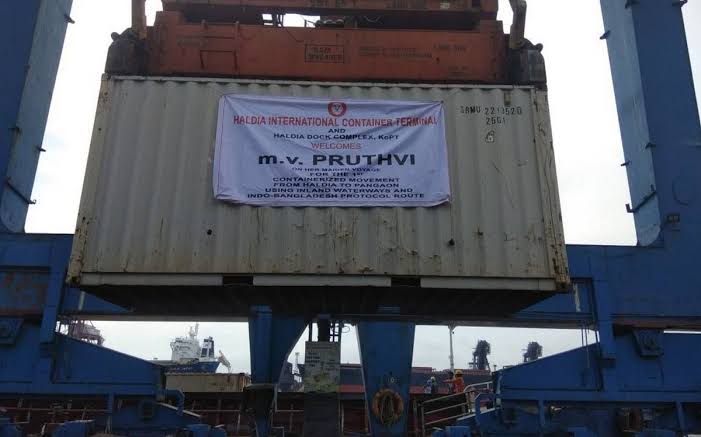 The barge “MV Pruthvi” carrying 45 TEUs (about 1,250 MT) of sponge iron was flagged off on 30th June 2020 from Haldia Docks for its maiden voyage from Haldia to Dhaka on Indo Bangladesh Protocol Route (IBPR). Post receipt of its Let Export Order, the barge sailed on 5th July 2020 from Haldia and completed its voyage in 7 days. Adani Logistics Limited in association with Five Star Logistics Private Limited is moving this first consignment of Rashmi Cement Ltd. and Orissa Metaliks Pvt. Ltd.

The India-Bangladesh Protocol on Inland Water Trade and Transit (PIWTT) was signed in 1972 to allow free movement of goods between India and Bangladesh through specified routes linking domestic cargo movement between West Bengal, Assam and Tripura via Bangladesh as well as export-import cargo movement from India to Bangladesh. Government of India in recent years has strongly supported the development and commercialization of Inland Waterways in India. Strengthening of PIWTT from time to time by both India and Bangladesh clearly indicates the vision for future trade between these two countries as well as to North Eastern States. The success of landmark container export cargo consignment has provided importers and exporters of India and Bangladesh an alternative to roadways and railways. Currently, majority of the exports and imports through West Bengal region to Bangladesh is taking place through Petrapole (India) and Benapole (Bangladesh). In fact, Petrapole is one of the largest Land Customs Station (LCS) in Asia handling a trade of more than US$ 2.5 billion.

“Since last year, our team is working on offering commercially viable logistics solutions using Inland Waterways. Previously, we have successfully completed the domestic containerized movement between Haldia – Patna on NW1 and Haldia – Guwahati on NW2 (using IBPR). The success of containerized movement from Haldia to Guwahati on NW2 (using IBPR) has generated keen interest with the importers/ exporters of both India and Bangladesh to extend its usage for Export Import cargo movement. One vessel movement is equivalent to 64 or more trucks. Thus Inland Waterways provides a competitive alternative to current road based movement of goods through Petrapole ICP. Containerized movement of sponge iron is a safer alternative as compared to carrying the cargo in bulk/break bulk which has also been appreciated by industry.” said  Capt. Anil Kishore Singh, CEO – Inland Waterways of Adani Logistics.

Pre COVID-19 lockdown, the ICP at Petrapole used to handle about 500-550 trucks from India and about 100-150 trucks from Bangladesh every day. Since past few years, exporters/ importers of both the nations are looking for alternative transportation options to avoid congestion, delays and multiple handling of cargo at Petrapole ICP (which shoots up the cost). Bulk commodities such as Fly Ash, Stone Aggregates, and Project Cargo etc. are already being moved from India to Bangladesh using inland waterways. Containerized cargo movement is an essential addition for making inland waterways an eligible candidate for high value goods too. Though both India and the Bangladesh Governments has identified Petrapole – Benapole land border stations as key export-import gateway for bilateral trade and are working together to provide every possible infrastructure.

Ms. Riva Ganguly Das, High Commissioner of India to Bangladesh welcomed the movement of first containerized cargo export from India to Bangladesh using Inland waterways. She said that “India and Bangladesh had recently signed the 2nd Addendum to Protocol on Inland Water Trade and Transit on 20th May 2020 which included two new routes, five new Ports of Call and two extended Ports of Call including Summit Alliance Port Limited (SAPL), Mukhtarpur in Bangladesh. Connectivity provided by the existing and the newly added protocol routes provides excellent opportunity for expansion of our bilateral trade besides which, in the present Covid-19 scenario it provides economical, faster and safer mode of transport for business communities of both the countries and will also have environmental benefits for the region.”