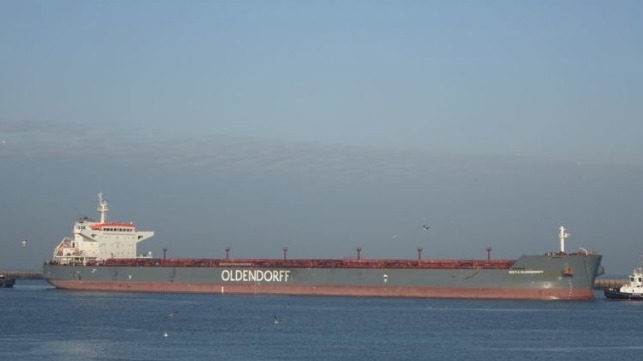 A bulk carrier anchored off Western Australia has become the latest vessel struck with a severe outbreak of COVID-19, serving as a reminder of the dangers that seafarers face during the pandemic. Currently, 80 percent of the crew aboard the 114,753 DWT bulk carrier during its current voyage has tested positive for the virus, although all are reported in good condition in quarantine until the virus is cleared.

The situation began on September 5, when the Patricia Oldendorff conducted a crew change while at Manila in the Philippines. Oldendorff in its statement on the current outbreak stressed, “The crew change was done in compliance with the Department of Transportation in the Philippines, Protocol for Crew Change and Repatriation.” Reports are that 20 of 21 crewmembers were switched with only the captain remaining aboard.

The Department of Health for Western Australia at the time said that “Given the size of the vessel and number of crew, the Department of Health anticipates additional crew will also become COVID-19 positive over coming days.” They said that none of the crewmembers required medical treatment at the time and that planning was in place regarding potential replacement crew as well as the deep cleaning of the vessel.

The following day the Health Department announced seven additional cases had been confirmed among the nine remaining crewmembers aboard the vessel.

Now the Australians have confirmed eight additional cases of the virus all found among the crew that had been transferred to shore. In total 17 crewmembers, including seven that remain on board as essential crew, have all tested positive for the virus. Only four crewmembers, at this stage, tested negative with two aboard and the other two on shore.

“We are very concerned about the health and wellbeing of our crewmembers and those caring for them,” said Oldendorff in its statement on the situation. “We have had excellent support from the Australian Department of Health, AMSA, and the Pilbara Ports Authority. The authorities have been managing the situation with upmost professionalism. Every effort is being made to contain and improve the situation as quickly as possible.”

Only a few of the crewmembers are reported to be showing slight symptoms of the virus but everyone remains in quarantine and will continue to be tested until they believe the outbreak has passed. Also, the Australia authorities have arranged for a thorough cleaning of the vessel.

Local media in Australia is reporting that residents of Port Hedland have also become very concerned because of the severity of the situation. While the local authorities are seeking to ensure the community that all the proper precautions have been taken, the Australian Defense Force has also been dispatched to ensure that the quarantine is fully observed. Health officials from Western Australia, however, are saying that they learned from the previous situation aboard the livestock carrier and cruise ship that previously had severe outbreaks of the virus in Perth.

The shipping company is reportedly still looking for alternate crewmembers to possibly staff the ship if the situation requires it and an alternate vessel is being sent to Australia to pick up the ore cargo that had been scheduled to be transported aboard the Patricia Oldendorff. It is unclear how long they anticipate the vessel will be held at anchor and when the crew might be permitted to return to their ship.