6 Floating Villages across the World 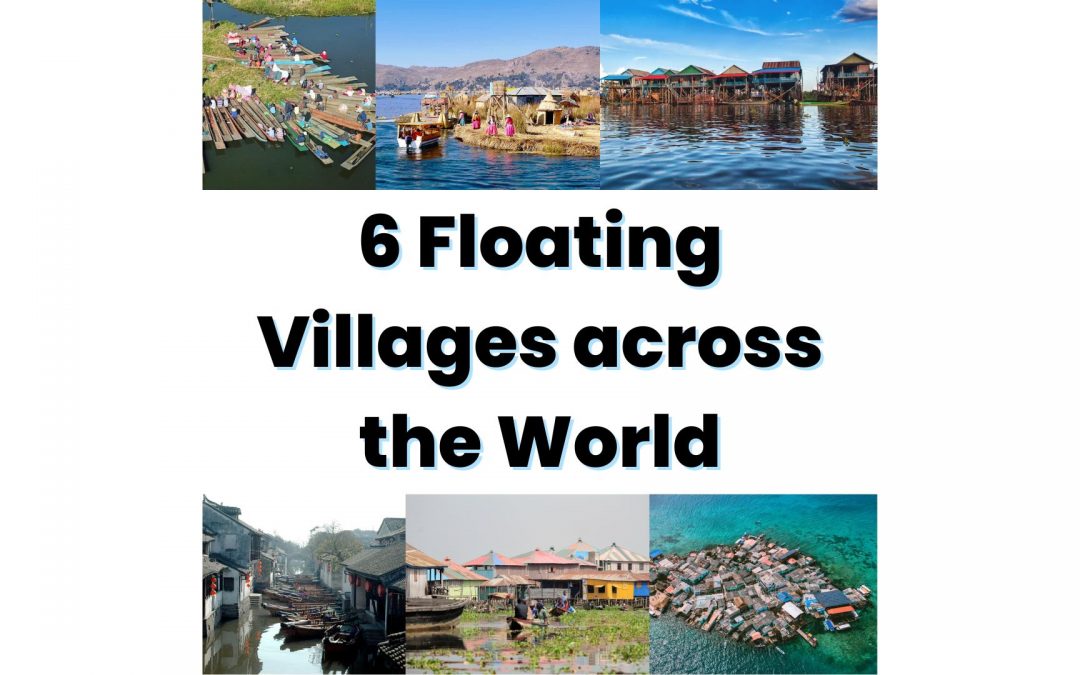 Water is an attractive factor when people choose where to live. When we look for a new place of accommodation the first thing, we seek for our convenience is the 24/7 supply of water. Historically, humans have chosen to live close to the banks of rivers for domestic and agricultural water supply as well as for navigation purposes, which has led humans to follow the courses of rivers during migrations and locate in proximity to rivers when establishing settlements. Human societies evolved alongside rivers, but how has the relationship between human settlement locations and water resources evolved over time?

Well, lives at some places around the world have literally evolved and over time have settled on the water beds and flow on the water. Such settlements are called Floating Villages. Here are 6 beautiful floating villages across the world that are not only breathtaking but also fall under the Wonders of the World.

One of the world’s most densely populated Islands with just 0.012 square kilometers with a population of around 1200 people was built in the 19th Century by Afro-Colombia and today is populated by fishermen and their families. The economy is based on fishing and services including cleaning, cooking, and tourism guides, which locals provide to the luxurious hotels in neighboring islands. There is a strong community spirit here – a family who needs help can count on the support of its neighbors. There are no reports of violence, there has never been armed conflict, and people do not worry about crime. The locals are working on conserving the sea turtles. Not only have islanders taken sea turtles off the menu, but they also educate other residents and visitors about the critical need to protect them.

The Uros is a unique indigenous race who migrated to Lake Titicaca an estimated 3,700 years ago. Tourism is a major source of income for the people of Uros. Despite how it may seem, the Uros embrace modern technology, relying on solar panels to power electronic devices such as TVs and charge mobile phones. The floating islands are an extraordinary feat of engineering, especially considering how long ago the originals were constructed. Workers collect totora reed, which is abundant in the lake, and weave their dense roots together to form a sturdy layer. During the tour, visitors can try on some traditional garb or go for a ride in a totora reed boat for a small additional fee.

Ganvie village was built in the middle of Lake Nokoué 400 years ago and its unique history starts in the era of slavery. In the 18th century, the people of the local Tofinu tribe were desperate to escape from the soldiers who captured people and sold them to Portuguese traders. The ancestors of today’s residents fled to the lake which was feared by the soldiers who believed a terrible demon lived under its surface. Knowing this, the tribe chose to build their homes on stilts in the middle of the water. The name of the village pays tribute to this history, Ganvié means ‘we survived’ in the local language. Today, there are approximately 30,000 people living in the village – they are known as the ‘watermen’. Around 10,000 tourists visit the lake village annually, according to local the tourism office.

Often known as the Venice of China, Zhouzhuang is a wonderful water town with a history of around 700 years. The place is famous for its gorgeous landscapes, stunning brick houses, and scenic bridges that enhance the charm of this floating village. To explore the beauty of this charming place, you may take a boat ride through its water lanes and enjoy its heavenly ambiance.

Champu Khangpok is no ordinary village. It may not be present on paper, but it continues to float — quite literally. Located at the edge of the mighty Himalayas, the Northeast Indian region abounds in natural beauty – picturesque rivers, dales, valleys, and freshwater lakes dot the landscape. Champu Khangpok village is said to be the only natural floating village on earth with 134 hutments home to around 400 people. Fishing is the primary source of Income. Markets and trade have traditionally been handled by women. Although fishing is primarily done by men, women oversee transporting the catch and selling it in the markets.   The lake is fed by eight rivers. In 1990, it was declared a Ramsar site — a wetland of international importance under UNESCO.

In the time of explorations that seek a living space for humankind beyond the earth, these floating villages remain as testimonies to the fact that human beings can adapt themselves to any environment and sustain themselves without any problems whatsoever. Hope you found this Blog interesting! If you’ve visited any of these floating villages do share your experience with us in the comments below.