5 Gigantic Ship Anchors in The World 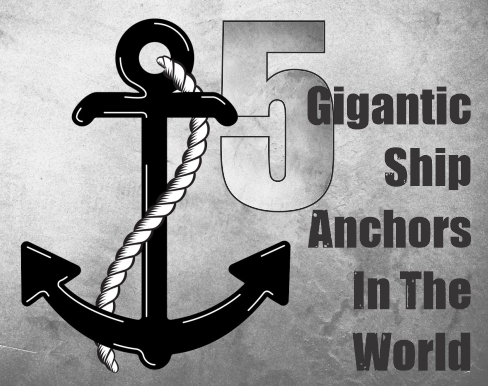 If asked to name a few parts of the ship, a vessel’s Anchor would surely be the first item on our list when asked to name a few parts. Anchoring is a fundamental and sensitive operation for a vessel. An anchor is a device that secures a vessel to the bed of a body of water, usually made of metal, so the craft does not drift. There can be permanent or temporary anchors. Permanent anchors are used to creating moorings and are rarely moved. When they need to be moved or maintained, a specialist service is needed. Temporary anchors are carried by vessels, which can be of different weights and designs. This has spurred interest to explore a list of 5 gigantic ship anchors in the world ever built. Happy Reading!

#1 USS Ford’s Anchor: The anchor and chain system aboard the USS Ford is very, very heavy. The anchor itself weighs 30,000 pounds. The chain is 1,440 feet long and each link weighs 136 pounds. Ford’s anchor chain is also three and a half inches in diameter compared to the four and three-quarters diameter of Nimitz-class carriers.

#2 Seawise Giant Anchor: A 36-ton anchor belonging to a historic ship, once the world’s largestis now located at the Hong Kong Maritime Museum. The anchor of the Seawise Giant has 20 links of chains and is 7m long, 4.45m across, and 1.13m thick. The ULCC (Ultra Large Crude Carrier) was the world’s longest ship until she was beached to be broken up after 35 years afloat.

#3 East River Anchor: A renowned New York-based contracting company that specialized in bridge and pier construction, tunnel, foundation, and sewer and drain work, between 1929 and 1987, pulled this anchor from the bottom of the East River, in November 1974. For many, it was one of the greatest discoveries ever at the time! As a result of its very early invention, the East River anchor was made of wood. However, it remains one of the heaviest anchors ever built-in history with a weight spanning thousands of pounds. Mostly, it is predicted that it is up to 5000 pounds and 15 feet long from the surface of the ground.

#4 HMAS Canberra Anchor: A heavy cruiser of the Kent subclass of County-class cruisers, HMAS Canberra was named after the capital of Australia. The anchor used in the HMAS Canberra is one of the heaviest anchors ever built with a gross weight of 4000 pounds.

Hope you found it interesting…if you know of more such Interesting Anchors share them with us in the comments below.