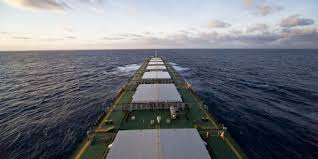 BIMCO started reporting from 30 September 2020, a series of articles, informing members of what to expect in the revised International Maritime Solid Bulk Cargoes (IMSBC) Code (Amendment 05-19), which will come into force on 1 January 2021. This is the 4th article in the series. Today, BIMCO reports on the re-classification of Group B cargoes in the IMSBC Code.

Group B cargoes in the IMSBC Code are defined as cargoes that possess chemical hazards that could give rise to a dangerous situation on a ship.

MHB cargoes, though do not qualify as dangerous goods under the IMDG Code criteria, are considered equally dangerous when carried in bulk according to the MHB criteria. Examples of MHB cargoes are “Direct reduced iron (DRI)”, “Charcoal” and “Petcoke” . Note that cargoes can also be classified as MHB by analogy with similar cargoes carrying known hazardous properties or by a history of accidents.

Now with the new Amdt 05-19, Group B cargoes (ref: section 9.1 of the IMSBC Code) have now been re-classified as follows:

The BIMCO online Solid Cargo Database has the full listing of cargoes under Amdt 05-19 for your information and guidance.