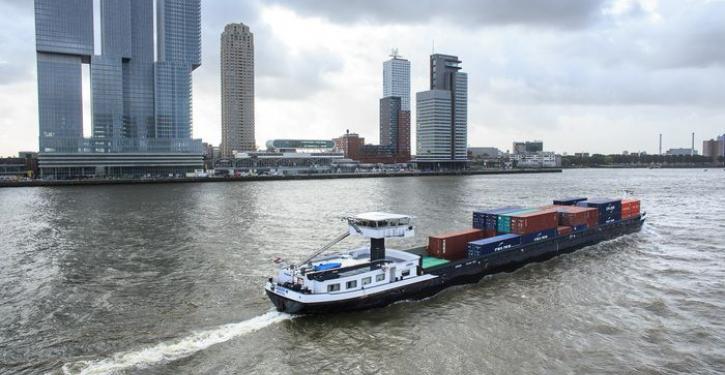 At the COP26 conference in Glasgow on Wednesday, the UK unveiled a new pledge to create zero-emissions shipping “corridors” between like-minded nations, providing incentivized routes for the operators of “green vessels.” The initiative is intended to kick-start a market for net-zero propulsion technology in deep-sea trades.

The 22 signatories to the declaration have pledged to support the creation of at least half a dozen “green corridors” by the middle of the decade, with an ambition to scale up and expand the scope of the initiative by 2030.

Under the framework agreement, signatories will partner with each other and work with ports, vessel operators and other maritime stakeholders to decarbonize a specific shared, international maritime route. Signatory nations also pledge to look for ways to set up zero-carbon corridors in their respective coastwise trades.

The declaration makes clear that these “green corridors” would not be exclusive or mandatory, and conventionally-fueled ships would still be allowed to compete alongside zero emissions ships on the same routes.

The signatories include two important shipowning nations, Germany and Japan, along with one major flag state, the Marshall Islands. The U.S., a top importer and exporter, is also on the list. 11 signatories are located in Europe and Scandinavia, where “green corridor” incentives could be deployed on short-sea routes.

The first draft of the COP26 conference’s core climate pledge was released Tuesday, and for the first time, it includes a call for parties to “accelerate the phasing-out of coal and subsidies for fossil fuels.” It may well be the first U.N. document of any kind to call for a coal phaseout, according to Greenpeace, and it fills a key gap in the Paris Agreement. The landmark 2015 decarbonization accord did not call for removing carbon from the world’s fuel supply, which accounts for two thirds of global greenhouse gas emissions.

The coal-phaseout pledge may not last into the final draft of the COP26 declaration. It is widely expected to come under pressure from leading fossil-fuel producers like Saudi Arabia and Australia, and there are still several days until the conference ends.

However, the language will have a solid core of support. Earlier in the week, roughly 40 nations signed a parallel pledge to phase out the use of coal for power generation. Another 20, including the United States, pledged to end government financing for overseas fossil-fuel projects by next year.

Though still many years off, an effective fossil-fuel phaseout would have a dramatic effect on shipping. According to ABS and Danish Shipping Finance, it would shrink entire segments of the dry bulk and wet bulk trades, leaving a smaller global fleet.

On Wednesday, on the sidelines of the COP26 conference, the IMO and the International Chamber of Shipping announced that they have discussed a small starter grant as a down-payment on ICS’ proposed $5 billion, 10-year R&D program on zero-carbon propulsion.

ICS Secretary General Guy Platten and IMO Secretary General Kitack Lim met with the deputy executive director of the UN’s Green Climate Fund, Javier Manzanares, to talk about access to the GCF’s Project Preparation Facility (PPF) funding mechanism. This grant program supports the early stage development of “micro to small projects of up to $1.5 million,” and ICS and IMO hope to use it to “develop potential solutions to ensure that developing economies . . . can access technology and funding for zero carbon ships and the required infrastructure.” The funds

According to ICS and IMO, a grant of up to $1.5 million – if approved – could be used to lay the groundwork to set up ICS’ zero-carbon shipping fund if it is approved by IMO’s Marine Environment Protection Committee (MEPC).

MEPC is set to consider ICS’ proposed fund at its next meeting, scheduled for Nov. 22-26. If set up, the fund would be self-financing through a small $2 per tonne bunker fuel fee. According to MEPC, the fee is not intended to create a cost incentive for the uptake of zero-carbon fuels – only to generate funding for R&D. It faces criticism from environmental groups, which contend that it is a distraction from the need to enact far larger fees – for example, Maersk’s proposed $450 per tonne bunker tax – in order to underwrite costlier zero-carbon fuels. From the other direction, the ICS proposal faces opposition from a group of developing nations that assert that a $2 per tonne fee is too costly for their shipping interests.