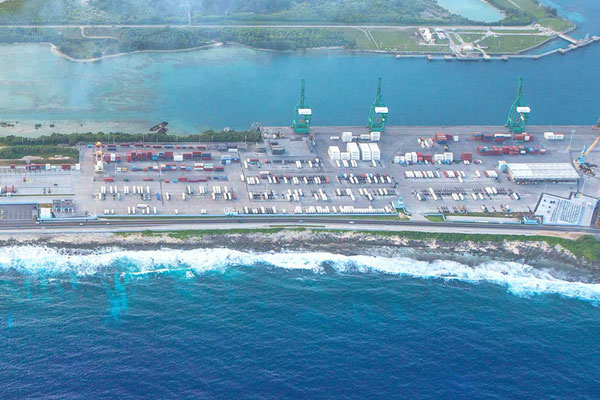 The U.S. Department of Transportation’s Maritime Administration (MARAD) has approved the Port Authority of Guam’s (PAG) Rebuilding America Infrastructure with Sustainability and Equity (RAISE) grant application in the amount of $17.9 million.

As disclosed, under the project, estimated at over $22 million, the port authority plans to upgrade wharves F1 through F6 to support ship-to-shore gantry crane operations. Specifically, it will address sheet piles and concrete cap spallings at the face of the port’s F2, F3, F4 and F6 wharves as well as the deteriorating structure of F1 Fuel Pier.

This initiative is sad to ensure the sustainability of Guam’s vital port infrastructure, securing the island’s capacity to continue to receive over 90% of all imported goods.

“Investment in port infrastructure is a vital component of the Governor’s strategy for economic recovery and the creation of more private sector jobs. By taking advantage of all federal grant opportunities, we can speed up this investment and bring more federal dollars into the local economy,” said Lt. Governor Joshua F. Tenorio.

Initially, the project was submitted to FEMA’s FY2020 Building Resilient Infrastructure and Communities (BRIC) Hazard Mitigation Grant Program (HMGP). However, with a belief that this project was in the best interest of the entire island and the whole Pacific region, PAG made revisions to localize and comply with MARAD’s stringent grant requirements and conditions.

“Our vibrant partnership with MARAD has been a critical component of our modernization program and the aggressive long overdue project funded under this Program supports the necessary upgrades that will further enhanced the Port’s core capabilities and resiliency,” General Manager Rory Respicio added.

In the past, the port secured a grant from MARAD for its modernization projects which kicked off in 2013. Marina renovation, site improvements and dock repairs have been done within the project. Furthermore, PAG was among the winners of the TIGER grant which was awarded to six US port projects in 2016.

The aim was to improve freight mobility which will eventually help reduce transportation costs and makes U.S. exports more attractive to overseas buyers.