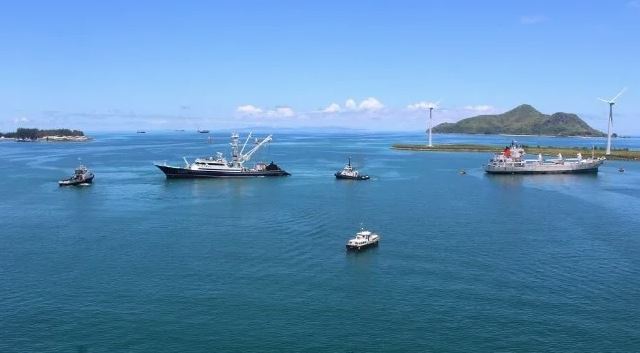 Ørsted has agreed to become the first tenant for the marshaling operations for its offshore wind farms at New Jersey’s newly developed wind port. The new port is created on the Delaware River near Salem, New Jersey, is billed as the first purpose-built port in the United States for the offshore wind sector and part of the state’s efforts to position itself as a leader in the developing industry.

New Jersey Governor Phil Murphy announced on Thursday that the state has signed a letter of intent with Ørsted to use the new port facilities for the development of the Ocean Wind 1 offshore wind farm.  Under the terms of the agreement, which the New Jersey Economic Development Authority expects to finalize in June, Ørsted will lease space beginning in April 2024 for up to two years supporting the offshore construction of the wind farm. When the wind farm was initially approved in June 2019, it was anticipated that they would use an existing out-of-state port to marshal for the project. New Jersey anticipates the agreement with Ørsted will create over 200 pre-assembly, load out, and stevedoring jobs at the port.

“Today’s announcement with Ørsted is proof that our strategy to establish New Jersey as a national leader in offshore wind is working,” said New Jersey Governor Phil Murphy. “As a state, we’ve committed more than $500 million to build the essential infrastructure required to install offshore wind projects from our shores.”

New Jersey announced plans for the new port in 2020 and began construction late in 2021. Phase 1 of the port is developing a 30-acre site to accommodate marshaling activities. It includes dredging the Delaware River Channel to provide access for the vessels that will transfer materials to the offshore site as well as creating a heavy-lift wharf with a dedicated delivery berth and an installation berth that can accommodate jack-up vessels. The port will be supported by a dedicated overland heavy-haul transportation corridor. Phase 1 of the New Jersey Wind Port is targeted for completion in early 2024 with later phases planned to come online between 2024 and 2026 expanding the size and capabilities at the site.

Initially, it will be supporting Ocean Wind 1, a 1.1 GW offshore wind farm that will be the first built off New Jersey. Located approximately 15 miles off the coast of southern New Jersey the project is being developed by Ørsted in partnership with PSEG. They reported that project engineering began during the first quarter of 2022, with construction estimated to start in September 2023. Ocean Wind 1 is expected to provide first power in late 2024. Planning is also underway for a second phase of the project, Ocean Wind 2, which would supply a further 1.1 GW of power.

Ørsted has been awarded contracts for 5 GW of capacity at a total of seven wind farm projects along the U.S. East Coast. The company, however, withdraw from the February 2022 New York Bight auction which included additional leases off the coast of New Jersey and New York.