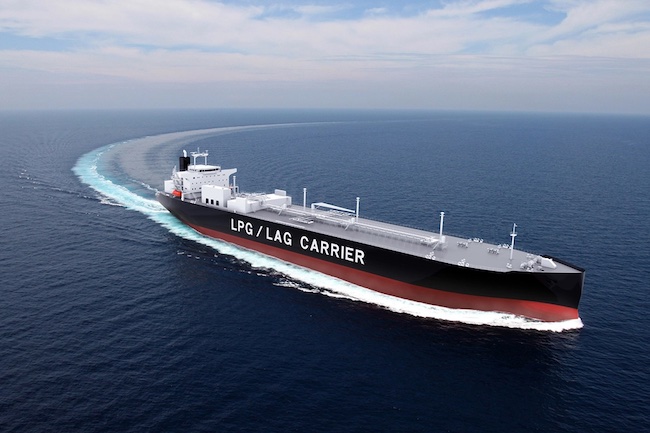 Mitsubishi Shipbuilding Co., Ltd., a part of Mitsubishi Heavy Industries (MHI) Group, has completed the conceptual design of a Very Large Gas Carrier (VLGC) initially powered by liquefied petroleum gas (LPG) but adaptable to future use of ammonia as the main fuel(1). Approval in Principle (AIP)(2) for the design has been acquired from the Japanese classification society ClassNK.

The conceptual design of an LPG-powered VLGC enabling future conversion to ammonia fuel was developed based on Mitsubishi Shipbuilding’s experience and expertise in the construction and delivery of more than 80 very large LPG carriers and multi-purpose gas carriers capable of carrying ammonia. Creation of a design enabling conversion to ammonia fuel in line with future needs is expected to permit relatively small-scale ship retrofitting when use of ammonia fuel becomes a viable option.

Ammonia is expected to come into wide use in the future as a stable and clean source of energy. Because it emits no CO2 when combusted, ammonia is garnering attention as a fuel that will contribute significantly to reducing greenhouse gas (GHG) emissions in the marine industry. Mitsubishi Shipbuilding’s newest VLGCs, in addition to using LPG fuel as an alternative to the conventionally prevalent heavy oil, can also transport ammonia as cargo. As such, the company’s VLGCs are highly suited to using ammonia fuel in the future. In recent years Mitsubishi Shipbuilding has been conducting investigations into the potential use of ammonia fuel in VLGCs as one means of achieving carbon neutrality in the global marine industry by 2050, a target pursued jointly by the public and private sectors in a quest to reduce the industry’s GHG emissions.

As part of the energy transition strategy being promoted by MHI Group, Mitsubishi Shipbuilding has established a growth strategy called “MARINE FUTURE STREAM.” The strategy focuses on two overarching targets: “decarbonization of the maritime economy” through use of renewable energies and carbon recycling, and “safe and secure future for society” through autonomous operation and electrification. The company seeks to achieve these dual goals through creation and application of marine-related innovations. Going forward, as a marine systems integrator Mitsubishi Shipbuilding will continue to promote decarbonization in the marine industry and devote its resources to achieving carbon neutrality, as its way of contributing to reducing environmental loads on a global scale.